Note:  It was a season opener to forget as the Jets dropped a 7-2 decision last night to the visiting Leafs.  The Jets will be back on the ice today for a 12 noon skate at the IcePlex.

Note II:  The big news for the Jets prior to puck drop last night was the news that the team had signed Nikolaj Ehlers to a seven year contract extension.  Full quotes as well as audio from Ehlers and GM Kevin Cheveldayoff.  Click here.

Note III:  The Moose practice today at 9:30 am at the IcePlex and will then head to Michigan as they prepare to face the defending Calder Cup champion Grand Rapids Griffins.  They kick off the 2017-18 AHL season with a pair of games on Friday and Saturday at Van Andel Arena.

Winnipeg Free Press:  Honeymoon looking more like seven-year itch.  (Paywall).  While there is no doubt that folks are still thankful for the relocation, it seems pretty clear that fans in this province care more about winning than anything else.

Winnipeg Sun:  Don’t panic about Jets just yet.  What the hell are fans to do with those giant red panic buttons they ran out to buy after the 1st period last night?

Winnipeg Sun:  Jets pounded by Maple Leafs in season opener.  That almost seems like an understatement after what we saw last night.  Ken breaks it all down.

Winnipeg Free Press:  New Jets goaltender gets little help in sloppy defensive effort from home side.  (Paywall).  It wasn’t a game to remember from essentially every player wearing a Jets uniform. 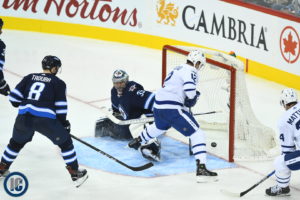 The Athletic:  Maple Leafs, Jets teammates marvel at how Matthews, Laine can shoot the puck. (Paywall).  It isn’t just their teammates who marvel at these two phenoms.  They are both just generational talents who have the opportunity to put their respective teams on their backs as they try to get to the next level.

Sportsnet:  How does Nikolaj Ehlers contract compare to NHL peers?  Looking at this contract you have to like it from the Jets perspective.

The Hockey News:  GM Cheveldayoff strikes again, signs Ehlers to remarkably team-friendly deal.  When I saw the term and the money you immediately thought it was an excellent deal for the team.  Assistant GM Larry Simmons also deserves a lot of credit for crafting it.

TSN 1290 Winnipeg:  Ehlers extension an erudite move for the Jets.  Ken Wiebe of the Winnipeg Sun joined the Afternoon Ride to discuss the Nikolaj Ehlers contract extension with the Winnipeg Jets, and previews the Jets home opener against the Toronto Maple Leafs.

TSN 1290 Winnipeg:  Jets have a nice core moving forward.  Jim Cerny of The Sporting News previewed the upcoming NHL season with Kevin Olszewski. They discussed Jack Eichel’s new contract, Nikolaj Ehlers extension, his expectations for the Winnipeg Jets and why Patrik Laine is his prediction as the Rocket Richard Trophy winner.

TSN:  Jets’ loss isn’t all on Mason.  Craig Button joins SportsCentre to explain why the Jets’ defence didn’t do much to help Steve Mason in his debut and also touches on Patrick Marleau’s two-goal performance.

TSN:  It was a collective meltdown from the Jets.  Steve Mason allowed three goals on 10 shots and was eventually pulled in his Jets debut. Darren Dreger and Mark Masters discuss Winnipeg’s situation in goal and also touch on the eight penalties taken by the Maple Leafs.

TSN:  Jets had no answer for Leafs’ speed and skill.  With the Maple Leafs on the penalty kill for much of the first period, they were able to unleash their offence late in the frame and it paid off with a trio of goals. Craig Button breaks down their attack and how they were able to get behind the Jets’ defence.

Winnipeg Free Press:  Forward knows what he has to work on while in the AHL.  (Paywall).  Kyle Connor is going to get a great opportunity to build his confidence in the AHL and then take it to the NHL the way he did at the conclusion of the 2016-17 season.

Illegal Curve:  Moose lose Nelson Nogier for 4-6 months.  Hard to lose a young player that early in a new season but at least the team has a plan for him while he is laid up.