Note:  We were waiting for the Jets to confirm the Andrew Copp two-year deal (which they did later on Thursday) when we learned via 2015 6th round pick Mason Appleton’s twitter that he was turning pro.  Jets confirmed that it was a three-year ELC for the Michigan State Spartans captain.

Note II:  Ez took a long look at the entire Jets roster from the forwards, the D pairs as well as the netminders and then prognosticated what he thinks the roster might look like in September.  Give it a read and let us know what you think.

The Sun Chronicle:  Erik Foley chats about Jets development camp.  Mid way down the article which covers local Massachusetts based athletes is the Jets prospect talking about the recent development camp and what he needs to work on.

Winnipeg Sun:  Appleton turning pro with the Jets.  After two seasons in East Lansing, Michigan he will be taking his talents to Manitoba to perhaps offset all the Wolverines (Copp, Trouba and Connor) in the province.

Sportsnet:  30 Thoughts.  While there is nothing Jets related in numbers 1-30 of the final 30 Thoughts of the season, however he does reference Winnipeg in the preamble when it comes to teams mentioned by a GM who may have salary cap concerns in the near future. 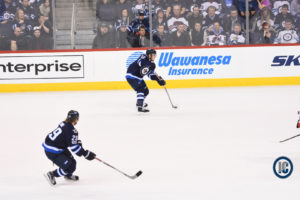 TSN 1290 Winnipeg:  Jets free agent deals carry lots of risk.   Matt Larkin of The Hockey News joined the Big Show for some hockey talk including where things will shake out in the Central Division this season and why the signings of Steve Mason and Dmitry Kulikov pose plenty of concern for the Jets.

Moose official site:  Heisinger grateful for AHL experience.  Voice of the Moose Mitch Peacock spoke with the Manitoba GM about his many years of experience within the American Hockey League.

Illegal Curve:  Moose lose Dan DeSalvo and Kevin Czuczman.  Two of the top five players in terms of points from last season are off to new destinations next season.