Note:  The Jets will kick off Prospect Development Camp today.  Here is the full schedule along with the roster of attendees.

Note II:  The Jets will be revealing which RFAs they have tendered qualifying offers to at some point today.  As always keep it locked to illegalcurve.com and on social media including Twitter | Facebook | Instagram for the latest news connected to the Jets.  Update:  The Jets qualified four of their seven RFAs ahead of the 4 pm CT deadline.

Winnipeg Sun:  Jets draft picks on ice today.  Will be plenty of new faces as well as some familiar ones this week at the Bell MTS IcePlex.

Winnipeg Sun:  Hamonic wasn’t right for Winnipeg.  There was lots of speculation last season surrounding the Manitoba product but in the end he will be providing his services two provinces over.

Winnipeg Free Press:  Hellebuyck needs help.  (Paywall).  Lots of rumours flying and we will soon have the answer to the question as to who will be partnering with the young Jets netminder. 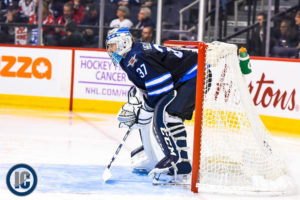 Illegal Curve:  Jets at the 2017 Draft and reflections on previous six NHL Entry Drafts.  Peter looks back at the Jets work this past weekend and then further back at the previous six drafts by Winnipeg.