Note: Kick start your day with three hours of hockey talk including plenty on the NHL playoffs on today’s Illegal Curve Hockey Show on TSN 1290 Winnipeg starting at 9 am.  You can tune in here.

Winnipeg Free Press:  The silence is deafening, Mr. Chipman.  (Paywall).  Paul is unhappy with the lack of access to Jets ownership.

Winnipeg Sun:  Jets have money coming off books, players to sign.  Ken gives you an update on who will be leaving and who will be needing a shiny new contract.

National Post:  Could Mark Scheifele’s young Jets be the next Maple Leafs?  Folks around these parts are expecting nothing less than playoffs next season.  Anything else would net pitchforks around Manitoba. 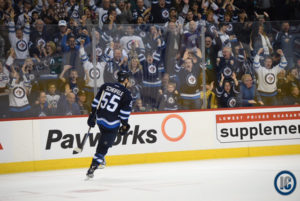 Illegal Curve:  Review of the top Jets prospects playing for the Moose.  Peter goes rather in-depth on his analysis of Eric Comrie, Kyle Connor and Jack Roslovic.

TSN 1290 Winnipeg:  Lots to be excited for after past season.  Captain Blake Wheeler joined Hustler & Lawless to discuss his team’s past season, the importance of head coach Paul Maurice in helping improve his and his teammates’ games, and what the team needs to do in order to improve for next season.