Note:  The Jets are riding a five game win streak following a 5-2 win last night over the Blues last night in St. Louis.  Today they are in Columbus where the team will practice at 1 pm as they get ready for the final road game of the season tomorrow at Nationwide Arena.  Update:  A bit of a surprise this morning as it was announced that the Jets had recalled Eric Comrie.

Note II:  The Moose knocked off the top ranked Griffins last night 3-1 thanks in large part to Eric Comrie’s 35 save performance.  No time for rest however as Manitoba have a re-match with Grand Rapids tonight at the MTS Centre starting with a 10 am morning skate and followed by a 7 pm puck drop.

Sportsnet:  Goaltending has made Winnipeg Jets NHL’s most disappointing team.  It has been a tough season between the pipes although that cannot be hung exclusively around the necks of the goalies themselves.

Winnipeg Sun:  Jets spirited against St. Louis.  Ken breaks it all down from St. Louis where the Jets completed their sweep of their central division rival.

Winnipeg Free Press:  Jets dump Blues 5-2 for fifth straight win, sweep season series.  (Paywall).  Who would have thought that you sweet St. Louis and almost sweep Chicago and yet you’d find yourself on the outside of the playoff picture.

St. Louis Post-Dispatch:  Blues swept by Winnipeg in season series.  (Requires a survey to read).  Read about the game last night in St. Louis from the perspective of a beat writer that covers the Blues.

Sportsnet:  Announcers think Allen made save of the year but it was a goal.  (Video).  Not only that but it ended up giving Mark Scheifele his 31st goal of the season and 80th point of the year.  He becomes the first Jets 2.0 player to hit the 80 point plateau.  Quite the season for the Jets top centre. 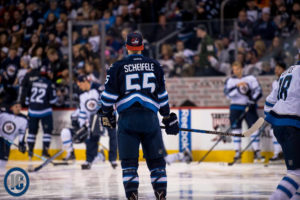 Illegal Curve:  With Bruins clinching playoff spot the Drew Stafford pick goes from a 6th to 5th rounder.  Ironic that Stafford’s game winner last night helped increase the Jets compensation for his trade by improving the draft position by one round.  If the Bruins win a round in the playoffs then it becomes even more promising.

Illegal Curve:  Jets players react to NHL decision to not participate in Olympics.  With the news that the NHL won’t be at the 2018 Olympics in South Korea some Jets players spoke about the decision including Blake Wheeler, Patrik Laine and Mark Scheifele.

Illegal Curve:  Post-game recap.  Another win for the Jets as they rolled to their fifth straight.  Head back to Scottrade Center to hear from Blake Wheeler, Mark Stuart and coach Maurice.