Note:  The Jets kick off their final road trip of the season with a Central division date as they take on the Blues in St. Louis.  Morning skate is at 11:30 am with puck drop at 7 pm. Big news of Monday was that the Jets have recalled Kyle Connor & Jack Roslovic from the Manitoba Moose although neither is expected to play tonight.  As always keep it locked to illegalcurve.com for pre and post game news and be sure to follow us on social media including Twitter | Facebook | Instagram.

Note II:  The Moose kick off their final home stand of the season with the Grand Rapids Griffins tonight at the MTS Centre.  Manitoba will have their morning skate at 10:00 a.m. with a 7 p.m. puck drop.

Winnipeg Sun:  Young Jets lesson starts with letter ‘D’.  To both of their credit they have improved at both ends of the ice this season with the Moose.

Winnipeg Sun:  No bruised egos (Or, Up for grabs?).  Paul writes this interesting story gathering the input of the two players who most presume are likely to be impacted by the NHL expansion draft.  A good read to get some insight into the way Adam Lowry and Mathieu Perreault see the upcoming June event. 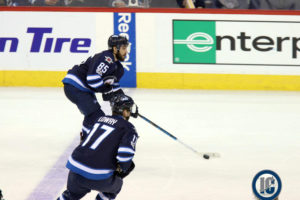 Winnipeg Sun:  Jets best with nothing on the line.  Don’t know how many people can get overly excited about that factoid considering the reality of what it means for the playoff aspirations of a team.

Winnipeg Sun:  Jets look to future with recall of top prospects.  Appears that that vision of the future will be on hold with neither expected to play tonight.

Globe and Mail:  Late slump in standout rookie season frustrates Jets star sniper Patrik Laine.  His frustration is understandable when you are used to putting the puck into the net or facilitating same like the Jets rookie has done so frequently his entire career.

Metro News:  Forward call-ups like a training camp preview.  No doubt about it that competition is a good thing and something that fans can look forward to in September.

Illegal Curve:  Tylers Myers on road trip (unknown if he plays).  Sounds like the Jets bench boss has some concern with what he saw at practice on Monday.

Illegal Curve:  Jets Practice Report.  A look at the forward lines that coach Maurice rolled out along with post-skate audio from Blake Wheeler, Jack Roslovic, Kyler Connor and coach Maurice.

TSN 1290 Winnipeg:  Connor, Roslovic rewarded for play with Moose.  TSN Jets Analyst Shane Hnidy speaks to Rick Ralph about the Jets call up of Kyle Connor & Jack Roslovic and the remaining three games on the schedule.

TSN 1290 Winnipeg:  Every day you try to get better.   Chase De Leo speaks to Rick Ralph about the number of different players on the Moose this season, his second professional season, how it has been different than his rookie season and the improvements to his game.