Note:  Even prior to puck drop there was a buzz in the air with the news that Jets got a deal done with 2013 5th rounder Tucker Poolman who spoke to media about his excitement to come play in this city.  While the game started slowly enough the fans ended up celebrating a second victory as the Jets came from behind to beat the Ducks.  Today the Jets are off as they ready themselves for a date with the Senators on Saturday night at the MTS Centre.

Note II:  The Moose are in San Jose to play the Barracuda as they look to build on their win back on Tuesday night in Bakersfield.  They will have “morning” skate at 1:15 pm CDT and then puck drop is at 9 pm.

theScore: 3 teams poised to make the playoffs next season after missing out in 2017.  Jets have a number of issues to address this summer but provided they do there is no reason to think they cannot be a playoff team at this time next year.

Winnipeg Free Press:  Scheifele snipes winner as Jets take down Ducks in OT.  (Paywall).  It was one of those games that you could have easily expected the home side to lose down 3-1 after 40 minutes but instead they managed to tie things up late and then Mark Scheifele fires home his 30th goal of the campaign for the win. 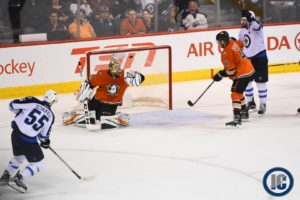 Orange County Register:  Ducks’ see third-period lead, 5-game win streak disappear in loss to Jets.  Get a different perspective on the game as you read a recap from a beat writer that covers Anaheim.

Winnipeg Sun: Jets make a go of it.  While the first 40 minutes weren’t anything to write home about the team managed to secure a win with a hard working final 20 and then were further rewarded with the victory in OT.  Ted breaks it all down.

Winnipeg Sun:  Jets feel fans frustration.   While folks talk about the honeymoon phase the reality is most Manitobans sitting inside MTS Centre or watching on the television can recognize effort and if they don’t see it, you can bet you are gonna hear from them.

Winnipeg Sun:  Tucker Poolman ready for next chapter.  Ken provides his insight into yesterday’s signing by the Jets.

Winnipeg Sun:  You be the boss of the Winnipeg Jets.  Lots of questions surrounding this Jets team and management.  Ken asks you for your input.

Illegal Curve: 2013 5th round draft pick Tucker Poolman signs with the Jets.  Plenty of concern in the fan base that he might not get signed but news this morning broke that they got the deal done.

Illegal Curve: Tobias Enstrom had knee surgery.  The Jets veteran defenceman had to have surgery on the same knee that he injured earlier this season.

TSN 1290 Winnipeg:  Poolman has NHL size, strength, and can skate.  Brad Schlossman of the Grand Forks Herald joins Hustler & Lawless to discuss Tucker Poolman signing with the Winnipeg Jets, and his long journey to the University of North Dakota Fighting Hawks.

TSN 1290 Winnipeg:  Poolman has a shot at a bottom pair defence position.  Ryan Kennedy of The Hockey News spoke to Rick Ralph about Tucker Poolman’s game, his NHL Draft Rankings, Matthew Tkachuk’s play this season and Josh Morrissey’s rookie season with the Jets.

Illegal Curve:  Eric Comrie named Manitoba Moose AHL Man of the Year nominee.  Like Josh Morrissey who went before him, the Moose netminder is a worthwhile nominee for this award.