Note:  Just three home games left and that number will be down to two after tonight when the Ducks visit the MTS Centre.  Morning skate is at 10:30 am with puck drop at 7 pm.  Update:  Plenty to digest from skate this morning including the news that Tobias Enstrom had surgery and is done for the season.  Update II:  The Jets also inked 2013 5th rounder Tucker Poolman to a contract.

Note II:  The Moose are in San Jose as they get ready for a pair of games this weekend against the Barracuda.  They will practice today at 1 pm.

Winnipeg Free Press:  Armia proving himself with strong short-handed play.  (Paywall).  The puck really does seem to stick to his blade when he has it.

Winnipeg Sun:  Laine not focused on Calder.  The Jets rookie hasn’t changed his position and what he says about the Calder race since the beginning of the season so it isn’t that surprising that he hasn’t switched his tone. 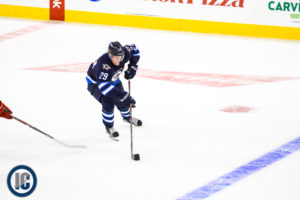 The Hockey News:  Missing the post-season (again) hurts, but Jets’ future is in good hands.  Jared takes a glass half full approach to the previous season.