Note:  Following a disappointing 5-2 loss to the Kings last night the Jets will now head across town to face the Ducks this evening.  Puck drop is at 9 pm.

Note II:  The Moose are also looking to rebound from a similarly disappointing 6-2 defeat at the hands of the Milwaukee Admirals.  They will have a chance for revenge tonight at the MTS Centre when puck drops at 7 pm.

Winnipeg Sun:  Five keys for the Jets to beat the Ducks.  Ken’s keys include: 1) Perreault producing. 2) Trouba provides a boost. 3) Raise your level. 4) Wrap up Rakell. 5) Contain Kesler.  And Ken’s big-matchup is Lowry vs Vermette.

Winnipeg Sun:  Critical time for Jets GM.  Extension or not this is the summer that the Jets GM is going to have to make a move or two or three to solidify this team for next season.

L.A. Times:  There’s a touch of nostalgia in Kings’ 5-2 victory over Jets.  A breakdown of the game from the perspective of a beat writer that covers the Kings.

Winnipeg Free Press:  Laine has input in power-play usage.  (Paywall).  Aside from goalies and defence this seems to be one of the most controversial topics this season. 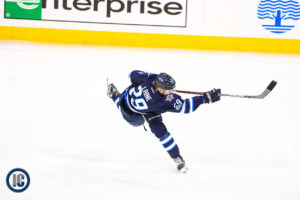 Sportsnet:  Why Patrik Laine should be ahead of Auston Matthews in Calder Trophy race.  Berkshire looks at the statistical strength of Laine’s game.

TSN:  It’s on! Patrik Laine vs. Auston Matthews.  (Video).  When will the debating end?  Of course the NHL awards will end this chat but I suspect we may be hearing this for the next 10-15 years.

Illegal Curve:  Moose injury news – Brendan Lemieux & Quinton Howden done for season.  I spoke with coach Vincent ahead of yesterday’s game against the Admirals and he provided updates on these two players and provided some analysis on how he thought they have played this season.