Note:  The Jets ended their two game road trip and returned home late last night following their 4-2 win over the New York Islanders.  The team has an off day today before they get back on the ice on Saturday at the MTS Centre at 11 AM in advance of a pair of games this week here in Winnipeg starting with the Wild on Sunday.

Note II:  The Moose are gonna be hoping that the luck of the Irish is with them tonight as they attempt to end their six game losing streak with the first of two this weekend against the IceHogs.  Pre-game skate is at 10 AM at the MTS Centre (Update:  Read more in the report from the rink with an update on Brendan Lemieux) and puck drop is at 7 pm.

Winnipeg Free Press:  It seems everyone knows who Patrik Laine is in his Nordic homeland.  (Paywall).  An interesting read on the impact the young superstar is having on fans back in Finland.

Winnipeg Sun:  Jets have enough firepower.  We have seen throughout the season the Jets haven’t had a problem putting the puck into the net.

Winnipeg Sun:  Bryan Little scores two as Jets dump Islanders.  Ken was front and centre for the game at Barclays and he filed this game report from Brooklyn. 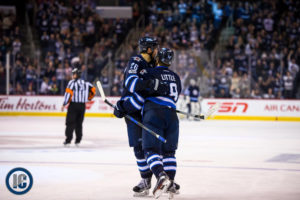 Winnipeg Free Press:  Tradition continues to trump science.  (Paywall).  It seems like the teams who have punted the morning skate are eastern based so perhaps a lighter travel schedule allows for this change.

Newsday:  Islanders lose crucial game to Winnipeg in playoff race.  Read about the game from a beat writer that covers the Jets opposition last night.

Yahoo Sports:  Finnish star Patrik Laine scoffs at New York area blizzard.  For a Finn living in Winnipeg it is going to take some cold/snow to really have any significant impact.

TSN:  The Jets are this season’s biggest disappointment.  That title says it all.  Yost doesn’t hold back in this one.

Illegal Curve:  Post-game report.  Head back inside Barclay’s Center to get some stats as well as audio from Wheeler, Hellebuyck, Lowry and coach Maurice.

TSN 1290 Winnipeg:  Under-experienced Jets haven’t underperformed.  Paul Wiecek of the Winnipeg Free Press joins Hustler & Lawless to discuss why his expectations for the Winnipeg Jets weren’t exceeded by the team from the beginning of the season, and looks at the Jets goaltending situation.

The Windsor Star:  Stanley set to rejoin club as he continues rehab after surgery.  Little bit of an update on the Jets other 1st round pick in 2016 who is still recovering from surgery.

UND Sports:  Poolman, Hrynkiw capture individual NCHC honors.  Folks around here cannot wait for that UND season to end so they can see Poolman’s name on a Jets contract.