Note:  The Jets will try once again to play game 71 on the schedule although this time it will be against the Islanders in Brooklyn instead of the Devils in New Jersey.  The Jets are scheduled to hit the ice at 9:30 am for morning skate with a 6 pm puck drop at the Barclays Center (Update:  Here is a look at the Jets lines from today’s skate along with pre-game audio).   As always keep it locked to illegalcurve.com for pre and post game news and be sure to follow us on social media including Twitter | Facebook | Instagram.

Note II:  The Moose are back on the ice this morning  at 11:00 AM after a day off on Wednesday.  We will be watching to see if Brendan Lemieux hits the ice after he landed awkwardly in the 2nd period of Tuesday night’s game.

TSN:  The Jets are this season’s biggest disappointment.  That title says it all.  Yost analysis doesn’t hold back in this one.

Winnipeg Sun:  Byfuglien’s play mirrors that of Jets.  Ken still has a belief that there is more to come from the Minnesota product as he simplifies his game and focuses on the elements that have brought him success in his game. 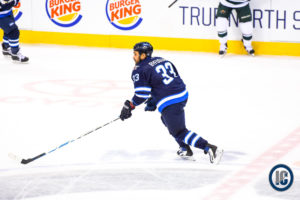 Winnipeg Free Press:  Things are looking up in Jetsville, folks… seriously.  (Paywall).  Paul takes a glass half full approach to the current state of the team with an eye to the future.

Sportsnet:  Byfuglien sees future Cup contender in Winnipeg. Good long read on the big defenceman who is likely still (despite the arrival of Patrik Laine) the most popular player in the city.

Metro News:  Jets fans ‘ask a jet’ a bunch of snarky questions.  When I saw that he was the subject of the Ask a Jet feature I figured it could lead to problem so I wasn’t overly shocked that there was some resulting snark from some fans.

Illegal Curve:  Jets Injury Report.  This was more of an injury and health report as some players are simply under the weather (i.e Mark Scheifele).  Includes an update from coach Maurice on the aforementioned Scheifele as well as Shawn Matthias, Tyler Myers, Marko Dano and Jacob Trouba.

Illegal Curve:  Jets Practice Report.  A look at who wasn’t on the ice yesterday at the Devils practice facility where Jets took to the ice as well as audio from Jacob Trouba, Adam Lowry, Marko Dano and coach Maurice.

TSN 1290 Winnipeg:  Dustin Byfuglien is still a big points producer.  Ken Wiebe of the Winnipeg Sun speaks to Andrew Paterson about his journey from Nashville to Newark and Dustin Byfuglien’s season with the Jets.

TSN 1290 Winnipeg:  Nic Petan;s growth will continue.  Shane Hnidy joins Rick Ralph and discusses the Jets injury status at practice and how Nic Petan can get back into the Jets lineup.

TSN 1290 Winnipeg:  Hellebuyck is going through the growing pains of the NHL.  Jamie McLennan of TSN speaks to Rick Ralph about the Jets goaltending this season, and possible solutions for the future.

TSN 1290 Winnipeg:  Jets may not infuse youth down the stretch.  Voice of the Jets Dennis Beyak joined the Big Show ahead of the club’s game against the Islanders to talk the status of Jacob Trouba and Tyler Myers as well as why there may not be players called up from the Moose to join the team in the final stretch run of the year.

Official Manitoba site:  Eric Comrie a lifelong goalie.  Mitch goes one on one with the prospect netminder who is shouldering the majority of games for the Moose this season.