Note:  The Jets are practicing today at the IcePlex at 12 noon today as they get ready to face the defending Stanley Cup champion Pittsburgh Penguins on Wednesday following a tough 3-2 loss to the San Jose Sharks last night.  Update:  Not many players were on the ice but plenty spoke at the IcePlex.  Listen here.

Note II:  The Moose are back in town but have cancelled their scheduled practice at 11 AM at the IcePlex.  They play on Thursday against the Charlotte Checkers.

Note III:  Tune into NHL This Week tonight from 6 pm CST until 8 pm CST on TSN 1290 Radio as the guys recap the Jets/Sharks game, look ahead to the Jets/Penguins game and take a look around the NHL.

TSN:  Jets 3-in-3.  (Video).  How will the Jets address their goaltending situation in the offseason? Which players could be left exposed in June’s expansion draft? Has Paul Maurice earned a contract extension? Sara Orlesky and Gary Lawless weigh in.

The Hockey News:  Morrissey’s growth promising for Jets, and he doesn’t plan on slowing down.  Remember when folks talked about him being a bust because he wasn’t in the NHL immediately?  Sometimes it pays to have a little patience.

Global News:  Joe Thornton earns 1,000th NHL assist.  He was incredibly humble after the game heaping praise on those around him as opposed to taking any credit for himself.

Winnipeg Free Press:  Sharks take bite out of Jets.  (Paywall).  Jeff breaks down the game as the Jets lost a tough one to a very good San Jose team. 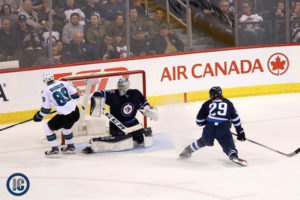 Winnipeg Free Press:  Hellebuyck starting to earn his keep.  (Paywall).  A look at the Jets goaltending situation and where it currently stands.

Winnipeg Sun:  Jets fail to break .500 again after loss to Sharks.  From inside the MTS Centre Ted filed this report on last night’s contest.

Winnipeg Sun:  Blues will be tough to catch with so many games in hand.  Probably the biggest factor is all those games that St. Louis plays against Colorado and Arizona.  Believe it is another six which isn’t good for a Winnipeg team trying to catch them.

CSN Bay Area:  Joe Thornton records game-winning 1000th assist as Sharks beat Jets.  Read about the contest from the perspective of someone that covers the Jets opposition.

TSN:  Jets continue to experience growing pains.  (Video).  After going on a 5-2-1 run and getting within a few points of the final Wild Card spot in the West, a third period shorthanded goal cost the Jets two big points Monday night against the Sharks. TH2N discusses the turnover that came at the worst possible time.

TSN:  The Reporters: Who should – and will – win the Calder Trophy?  (Video).  The Maple Leafs and the Jets are battling for playoff spots, but there’s increasing interest over who will be named Rookie of the Year. The Reporters share their thoughts on whether Auston Matthews or Patrik Laine will get the award.

Sportsnet:  Maurice asked to weigh in on Laine vs. Matthews debate.  (Video).  Jets head coach Paul Maurice may be a bit biased, but when asked about Laine vs. Matthews Calder race, says it’s going to be very interesting, but he doesn’t have a vote.

Sportsnet:  Maurice’s Babcock comments a mere deflection of Jets’ real problems.  Perhaps I’m incorrect in my assessment but as I said on Saturday’s Illegal Curve Hockey show I really didn’t interpret the coach’s comments being directed at his counterpart in Toronto but more towards those behind the cameras and pens in that city.

Winnipeg Sun:  When Laine scores, Jets usually win.  The Jets bench boss had a good line about wanting to see him score 40 or 50 more goals.

Winnipeg Sun:  Captain Blake Wheeler driving Jets resurgence.  While there could still be a bump or two along the way the play of #26 has certainly steadied the ship for the Jets.  Ted has more in this article on the Jets captain.

TSN 1290 Winnipeg:  Laine gets the edge as more complete player.  Dawson Sprigings of Hockey Graphs and DTMAboutHeart joins Hustler & Lawless to look at the challenge in comparing two players in different positions, and explains why Patrik Laine is a slightly more complete player because of the team and systems he plays in.

TSN 1260 Edmonton:  Talented Jets still have some things to learn.  Andrew ‘Hustler’ Paterson from TSN 1290 Winnipeg joined Nielson & Fraser to take the pulse of the Winnipeg Jets as they continually flirt with the final Wild Card spot in the Western Conference.

TSN 1290 Winnipeg:  Josh Morrissey developing into complete d-man.  Color analyst Shane Hnidy broke down the Winnipeg Jets 3-2 loss to the San Jose Sharks on the Big Show including a continued trend of solid play from the club, Joe Thornton’s 1000th assist and Josh Morrissey including an offensive flair to go along with his solid defensive play.