Note:  The Jets welcome last year’s Western Conference champion San Jose Sharks to the MTS Centre for the fourth game of this six game home stand.  The Jets are looking to keep the momentum going following a sweep of their weekend contests against the Blues and Avalanche.  As always keep it locked to illegalcurve.com for pre and post game news and be sure to follow us on social media including Twitter | Facebook | Instagram.

Note II:  The Moose return from their four game road trip after yesterday’s 5-4 loss to the Wolves in Chicago in the concluding game.  They have a travel day today following their three games in three days (Friday to Sunday) and will be back on the ice on Tuesday as they prepare for the next eight games at the MTS Centre.  Despite the loss they are 4-1-1-1 in their last seven games.

Winnipeg Sun:  Five keys to Jets vs. Sharks.  Ted’s keys include: 1) Contain the mountain man. 2) Keep on scoring. 3) Connor on a roll. 4) Dynamic pair in Trouba and Morrissey. 5) Hang on tight.  And Ted’s big matchup is Brent Burns vs. Dustin Byfuglien.

Winnipeg Sun:  Jets looking to get over .500 mark … again.  The fact is this team doesn’t really have to worry about their record anymore.  They simply cannot afford to lose.  So as cliche as it is to say they can just look at the next game in front of them and play for those two points.

Winnipeg Free Press:  Trouba has Jets holding out hope.  (Paywall).  The play of the blueliner is exactly why he is rightly seen as the steal of the 2012 NHL entry draft.  Six other defencman went before him and as I’ve said countless times on air, he is the type of player you base your D core around.  Mike also writes about Connor Hellebuyck, Patrik Laine in the Calder race and the San Jose Sharks. 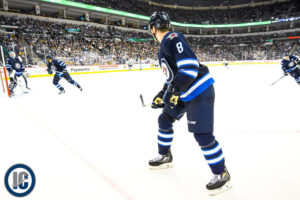 Illegal Curve:  Moose rookies Roslovic, Connor and DeSalvo are catching fire.  Coinciding with better team play these three rookies seem to have really picked up their games of late.