Note:  The Jets will be in tough tonight against a very good Pittsburgh team as they look to kick off this four game road trip on the right foot.  Morning skate will take place at 10:30 am at PPG Paints Arena with puck drop at 6 pm.  Be sure to keep it locked to illegalcurve.com for pre and post game news and be sure to follow us on social media including Twitter | Facebook | Instagram.

Note II:  The Moose were in tough again yesterday morning against a very good Griffins team and while it looked like they would compete until the end they couldn’t keep up the pace and eventually lost 7-5 in an early morning shootout in Grand Rapids.  The team re-enters Canada and will spend the next three days in Toronto as they practice this afternoon at Ricoh Coliseum before back to back contests on Friday/Saturday against the Marlies to close out the six game road trip.

Winnipeg Sun:  Copp joins list of walking wounded.  I prefer skating wounded but since it is Ken’s article we shall let him have the final word.  Ken was down at the IcePlex and fills you in on the latest happening with the Jets including the injury to centre turned winger Andrew Copp.

Winnipeg Sun:  Jets hit road with glimmer of hope.  One week of road hockey followed by almost one week off will firmly establish where this Winnipeg team sits in terms of the playoff picture.  At least you hope it would but with the way this season has gone nothing is too predictable.

Winnipeg Free Press:  Sun may set in the East for Jets.  (Paywall).  While Mike isn’t talking about something as impossible as reversing the course of the earth the Jets do have a tall task ahead of them on this tough Eastern road swing.

Times Columnist:  Jets will be dealing with distractions on critical four-game road trip.  Crosby’s 1000th point, Julien’s Habs debut and the circus that is Toronto.  About the only reprieve will come in our nation’s capital.

Sportsnet:  Is Jets forward Bryan Little having a great season or a lucky one?  I’m not sure why he keeps referencing the top line for the Jets as Ehlers-Scheifele-Laine since up until last game Bryan Little was actually playing with those two and had been since game 52 (January 26th) against Chicago.  Even last game Little was playing with Wheeler and Ehlers as his wingers but this housekeeping aside Andrew looks at the underlying number for the Jets centre. 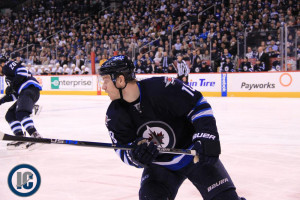 Illegal Curve:  Winnipeg is going to need more hats with all these Jets hat tricks.  After three dry years to start off their time in Winnipeg the Jets have sure been busy the last 2.5 seasons as they’ve had seven hat tricks.

Illegal Curve:  Jets Practice Report.  Some of the Jets hit the ice before the team left for Pittsburgh.  Then we heard from Mark Scheifele, Josh Morrissey and Coach Maurice.