Note:  The Jets have today off following back to back losses against the Hawks and Bolts on Friday and Saturday.  They haven’t sent out the weekly schedule but they will likely have a practice on Monday as they get ready to face the Dallas Stars here on Valentine’s Day.

Note II:  The Moose will play an afternoon contest against the Monsters today in Cleveland at 2 pm CT.  You can listen to the call of the game with voice of the Moose Mitch Peacock who starts the pre-game 15 minutes before puck drop.  Listen here.

Winnipeg Sun:  Jets get struck down by Lightning.  This team is confounding as folks try to figure out which squad is going to hit the ice wearing a Winnipeg uniform.  Ken breaks it all down here. 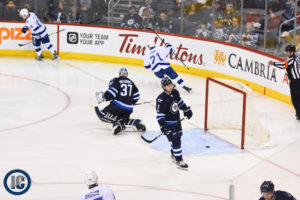 Winnipeg Free Press:  Jets glide through another loss.  (Paywall).  Mike wonders where the desperation was in another loss by this squad.

CBC:  Jets’ home woes continue in drubbing at hands of Lightning.  Generally your home building is referenced as the friendly confines but the MTS Centre has been anything but friendly of late.

Tampa Bay Times:  Lightning heads into bye with win over Jets.  Both teams were desperate for points but Tampa showed that they were ready to go right from puck drop.  Read about the game from the Lightning perspective.

TSN:  Enstrom exited loss early with LBI.  It was hard to really tell where he got hurt but the Jets basically played an entire game with just five defencemen.

The Hockey News:  Two years after blockbuster deal, who’s the winner of Kane-Myers swap?  I will feel comfortable answering this question at the end of the 2017-18 season (maybe) when we see where Roslovic and Lemieux are within this organization.

Illegal Curve:  Post-game Report.   Head into the Jets with me to hear from Wheeler, Perreault, Scheifele, Hellebuyck and Coach Maurice.  And then into the Lightning room with Ezra to hear from Bishop, Drouin and Coach Cooper.

Topics: Jets-Blackhawks Recap. Jets-Lightning Preview. Goaltender targets for the Winnipeg Jets (This Season or Next). Would you support the Jets trading a young forward for a young defenseman?