Note:  No time to rest for the Jets as they are back in action tonight following a 5-2 loss to the Hawks last night.  The good news for Winnipeg is Tampa Bay played in Minnesota last night.  No morning skate today so we won’t know if coach Maurice decides to run with Connor Hellebuyck once again.  Keep it locked to illegalcurve.com for pre and post game news and be sure to follow us on social media including Twitter | Facebook | Instagram.

Note II:  The Moose also played last night and despite some excellent production from the line of Patrice Cormier (2 goals), Kyle Connor (2 assists) and JC Lipon (2 assists) they fell to defending Calder Cup champs Cleveland in a shootout last night.  Manitoba will hit the ice late afternoon in Cleveland for a practice as they get set for a Sunday re-match with the Monsters.

Note III:  Julian Melchiori has cleared waivers and was re-assigned to the Manitoba Moose.

The Hockey News:  Two years after blockbuster deal, who’s the winner of Kane-Myers swap?  I will feel comfortable answering this question at the end of the 2017-18 season (maybe) when we see where Roslovic and Lemieux are within this organization.

Winnipeg Sun:  Five keys to Jets vs. Lightning.  As I wrote above there isn’t much time to think about yesterday’s game and even Ken is looking ahead.  His list includes: 1) D is for discipline. 2) Captain leads the way. 3) Checking-plus unit. 4) Contain Kucherov. 5) Watch the minute-muncher.  And Ken’s big matchup is Nikolaj Ehlers vs Jonathan Drouin.

Winnipeg Sun:  Jets in danger zone after loss to Hawks.  Ken writes about not just last night’s failed attempt to gain ground but how these losses are mounting for Winnipeg.

Winnipeg Free Press:  Chicago shows its strength.  (Paywall).  While the score isn’t necessarily indicative of the play on the ice (Hawks did have two empty net goals after all) you got the sense as the game kicked off that Chicago wasn’t being swept by the Jets.  Corey Crawford also played a heck of a good game. 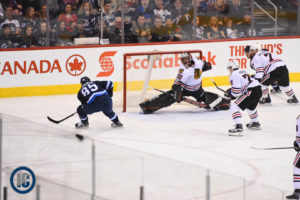 TSN.ca:  Little wants to be a Jet for rest of career.  Bryan Little seems more than content in Winnipeg. The Jets forward told TSN’s Gary Lawless that he would love to sign an extension with the team and stay in Winnipeg for the rest of his career.

Illegal Curve:  Post-game Report.   The Jets finally lost to the Hawks for the first time this season.  Head into the Jets dressing room with me and hear from Jacob Trouba, Connor Hellebuyck and Bryan Little.  Then we head to the Matt Frost Media Room to hear from Jets head coach Paul Maurice.

TSN 1290 Winnipeg:  A hungry Hellebuyck given the chance to play out the season.  Ken Wiebe of the Winnipeg Sun joined Hustler & Lawless to discuss how the injury to Ondrej Pavelec affects the Winnipeg Jets’ goaltending situation, and how Connor Hellebuyck can take backstop the Jets for the bulk of the rest of the season.

Official Manitoba site:  Recap of 3-2 SO loss to the Monsters.  Get caught up with the action from last night’s game in Cleveland.

Winnipeg Sun:  Lemieux a chip off the old block for Moose.  As I wrote last week when the Barracuda were in town and about five players wanted to take off his head, he has a certain way of getting under the opponents skin, not unlike his papa.