Note:  The Jets enter their three game break following last night’s big 5-3 comeback win over the Hawks.  We will likely hear from Patrik Laine this weekend as he has made his way to L.A. for the All-Star game this weekend.  The Jets team won’t be back in action until Monday when they practice in Winnipeg as they get ready to head out on a three game road trip.

Note II:  If you were worried that you’d miss hockey fear not as the Moose are in action tonight in North Carolina as they finish off this six game road trip with a pair of games against the Checkers.  The team is coming off a 2-1 win over the Texas Stars on Tuesday.

The Hockey News:  Why this season’s Calder Trophy race could be the closest in years.  Something tells me this race is going to last until the end of the season.

TSN:  Old issues continue to plague the Jets.  Craig breaks out his teacher grading pen to give the Jets some mid season grades.  Little deserves more than a ‘B’ in my mind but that is just my opinion.  What do you think of the grades?

Winnipeg Sun:  Hellebuyck holds fort as Jets blitz Blackhawks.  Listening to him post-game he sounded way more relaxed.  Ken breaks it all down from the United Center.

Winnipeg Sun:  Laine ready to represent.  It is amazing to hear him speaking and having to remind yourself that he is only eighteen years old.  Lots of poise as he takes his responsibility to represent not just the Jets but the city of Winnipeg in front of the entire NHL this weekend.  He looks like he is getting back into the swing of NHL action as he recovers from his concussion and has now re-taken the rookie points scoring lead. 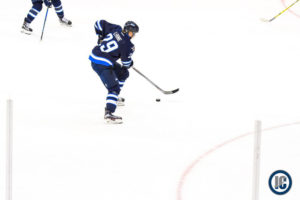 Winnipeg Free Press:  Jets continue to dominate ‘Hawks with 5-3 win in Chicago.  (Paywall). Who believed the Jets would have four wins and zero losses against one of the best teams in the Western Conference?  Jason recapped the contest from his perch in Chicago.

Illegal Curve: Post-game report.  Head back to the United Center and see the numbers and hear from Blake Wheeler, Connor Hellebuyck and Coach Maurice.