Note:  The Jets will depart Winnipeg at some point today, possibly choosing to skate before they take off for Chicago for a Thursday night date with the Blackhawks.  It is the final game before the All-Star break.

Note II:  The Moose have split both series in Texas winning and losing against both the Stars and Rampage.  Last night Dan DeSalvo scored twice on the power play to give Manitoba a 2-1 win over Texas.  Eric Comrie has made all four starts with Jamie Phillips acting as his backup.  The team will travel to North Carolina for a pair of games this upcoming weekend against the Checkers.

Note III:  Today is #BellLetsTalk day which is a day to help break the silence around mental illness and support mental health, a subject which I’ve previously written about.  I think, especially in these polarizing times, it is important to reiterate that while you may be passionate about the subject of sport please try and think before you tweet.  Sometimes waiting that extra second or two can make a huge difference in someone’s life.  Check out this video with a Manitoba connection is one done by Sarah Orlesky and TSN on Rick Rypien.

Sportsnet:  The Jets are slowly moving on from their core of ex-Thrashers.  While fans want this transition pushed ahead it bears repeating that you shouldn’t rush young prospects into the NHL.

Winnipeg Sun:  Sharks rally against Jets.  Ken talks about the controversial penalty shot awarded and the game overall in his recap. 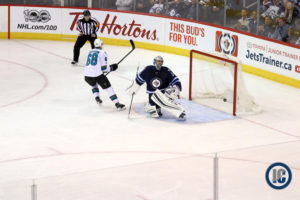 Winnipeg Sun:  A second straight home loss for the Jets.  Paul offers plenty in this assessment of last night’s contest as well as other topics including: 1) Disallowed goal. 2) Little’s play. 3) Not jumping the Sharks. 4) Perry’s slash ok. 5) Playing ugly being a good thing. 6) World Cup hurting the game.

Winnipeg Sun:  Copp earns additional ice time.  When I spoke to him when he got sent down to the AHL he took it in stride and I wasn’t surprised that he was able to transition back to the NHL game.  Ken has more on Copp in this piece.

Winnipeg Free Press:  San Jose finds (controversial) way to win.  (Paywall).  Fans were less than pleased to see the penalty shot get awarded after Trouba made contact with Karlsson.  Mike breaks it down for you here.

CSN Bay Area:  Marleau’s 498th career goal puts the Sharks back into first place.  Read about the game from someone who covers the Sharks as closely as anyone in the Bay Area.

TSN:  Questionable calls overshadow Laine’s return.  (Video).  Patrik Laine picked up an assist after missing eight games with a concussion but all the talk after the Jets’s loss surrounded a penalty shot and a no-goal call that went against Winnipeg.

TSN:  Should Laine still attend All-Star weekend?  (Video).   With Patrik Laine returning to the Jets lineup tonight should he still attend the All-Star Game this weekend? That’s Hockey explains why that could be the best thing for a player returning from a concussion.

Illegal Curve:  Mathieu Perreault out indefinitely.  The news wasn’t good about Perreault’s health and we will have more in him as well as the rest of the Jets skating wounded this morning.

Illegal Curve:  Evaluating games 41-50.  The Jets may have played game 51 last night before yesterday afternoon I looked back at the previous segment of ten games, including goal scoring, goaltending, special teams and injury news.

Global News:  Dan DeSalvo strikes twice in Manitoba Moose victory.  It is quite amazing that he started the season in the ECHL without an AHL deal and yet he currently leads the Moose in goals.