Note:  It was a tough but entertaining game last night that the home side dropped by a score of 3-2 but they won’t have time to lick their wounds as the Sharks are in-town to face the Jets as they close out a four game home stand.  Puck drops tonight at 7:00 pm.  As always keep it locked to illegalcurve.com for pre and post game news and be sure to follow us on social media including Twitter | Facebook | Instagram.

Note II:  The Moose are also playing today in game four of this six game road trip.  They practiced in San Antonio yesterday after splitting the series with the Rampage.  Today they will face the Stars in Cedar Park with a game day skate at 11:15 am and then a 7:30 pm puck drop.

Winnipeg Sun:  Copp earns additional ice time.  When we spoke to him when he got sent down to the AHL he took it in stride and I wasn’t surprised that he was able to transition back to the NHL game.  Ken has more on Copp in this piece.

Winnipeg Sun:  No discipline for Perry for slash on Perreault.  It would be interesting to know if the league is aware of the severity of the injury (or lack thereof) before they make this determination.  Because if Perreault is out long term as a result you’d think that would factor into their decision.

Winnipeg Sun:  Five keys to Jets vs. Sharks.  Ken’s list includes: 1) No rest for either team. 2) Beware of Burns. 3) No ordinary Joes. 4) Taking care of the middle. 5) Poor vs. Pacific.  And Ken’s big matchup is Nikolaj Ehlers vs. Marc-Edouard Vlasic.

Winnipeg Sun:  Jets drop tough one to Ducks.  It did feel a bit like that playoff series against the Ducks a few years back with that heavy style Anaheim played.  Ken recaps the game.

Winnipeg Sun: Ehlers gets message.  The Dynamic Dane sure did get the message as he was consistently dangerous throughtout the contest against the Ducks, which included his scoring his 17th goal of the season. 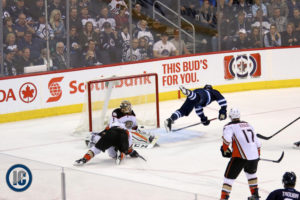 Winnipeg Free Press:  Perreault’s optimism takes hit.  (Paywall).  Feels like we were just talking about his well being just yesterday (literally) and now this. 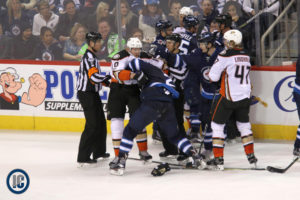 Illegal Curve:  Post-game recap.  Head into both the Jets (Wheeler, Ehlers, Pavelec, Copp) and Ducks (Getzlaf, Bernier) dressing rooms as well as from both Coach Maurice and Coach Carlyle.

Illegal Curve:  Logan Stanley has surgery; could miss up to four months.  We saw him around the MTS Centre the last few days and the reason for that became evident when his junior team announced that he had surgery.