Note:  The Jets will kick off today with a 10:30 am morning skate as they get ready to face the Ducks in the third game of this four game home stand.  Puck drops tonight at 7:00 pm.  As always keep it locked to illegalcurve.com for pre and post game news and be sure to follow us on social media including Twitter | Facebook | Instagram.

Note II:  The Moose had the day off on Sunday but will practice today at 10:00 am at AT&T Center in San Antonio as they get ready to head to Cedar Park, Texas to take on the Stars tomorrow night.

Winnipeg Sun:  Five keys to a Jets victory. Ken’s list includes: 1) Can Pavelec keep it going? 2) Take 9 for three in a row. 3) Powerfull stuff. 4) Byfuglien finding his groove. 5) Containing the two-headed monster. And his big matchup is Mark Scheifele vs Ryan Kesler.

Winnipeg Sun:  Perreault rounding back into form.  He is playing the way they anticipated he would when they signed him to an extension this past summer.  Ken has more on how he is starting to feel like the 85 of old. 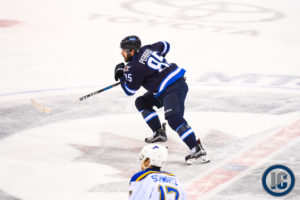 Winnipeg Sun:  Laine clears another hurdle.  Fans were ecstatic to see him rocking a normal uniform in practice uniform and while it may be a game or two before he is fully back in the lineup it won’t be long before we see that slap shot instilling fear in opposition netminders.

Winnipeg Free Press:  Pavelec focused on the present.  (Paywall).  Based on the situation it makes sense that the current Jets netminder isn’t looking too far past his next start.

Winnipeg Free Press:  Laine could play this week.  (Paywall).  Fans were clearly overjoyed (based on the reaction on twitter) to the news that he should be back in the lineup sometime this week.

Illegal Curve:  Winnipeg Jets Injury Report.  We got an update from coach Maurice on the status of Patrik Laine, Drew Stafford and Tyler Myers.