Note:  No rest for a despondent Jets team who dropped last night’s game 4-3 to the Coyotes and then flew to L.A. for a game tonight against the Kings.  The team won’t have a game day skate but should have player availability closer to game time.  Be sure to keep it locked to illegalcurve.com for pre and post game news and on social media including via Twitter | Facebook | Instagram.  Update:  Coach Maurice confirmed that Michael Hutchinson starts in net and it will be same lines and D pairs tonight.  For our full pre-game report click here.

Note II:  The Moose also had a disappointing night although unlike the Jets it was a game that Manitoba could have won.  We also found out that Anthony Peluso is likely done for the season after he had surgery.  The Moose have a re-match with the Wolves tomorrow at 2 pm at the MTS Centre.

Winnipeg Sun:  Five keys for Jets vs. Kings.  Ted gives some pre-game insight and his five include: 1) Back-to-back boon. 2)  Get back to even. 3) Playoff implications. 4) Defensive starts. 5) Steal one.  And Ted’s big matchup is Scheifele vs Kopitar.

Winnipeg Sun:  Hellebuyck pulled again as Jets fall to Coyotes.  Connor Hellebuyck spoke of confidence and now he’s going to need some resiliency as he faces questions following his being pulled in back to back games.  Ted breaks down the game in this column. 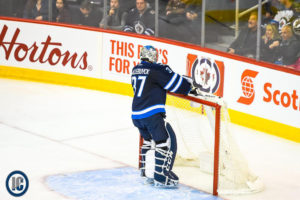 Winnipeg Free Press:  Coyotes pounce early, often in 4-3 win over Jets.  (Paywall).  Last night we saw a battle of a rested team vs an angry team and those six minutes in the 1st period proved to be the difference in this one.  Paul breaks down the game.

Toronto Sun:  NHL trade deadline looms large for Canadian clubs.  Michael is writing about all the teams here in Canada but has quite a few quotes from Jets GM Kevin Cheveldayoff.

Metro News:  McCabe-Laine hit not worth changing NHL rules.  While I understand the concern folks have about the repercussions of concussions I just don’t see how you can legislate these hits out of the game.

TSN:   Fine details are Woodcroft’s craft with Jets.   Paul comes down from the booth (or perhaps he wrote this while in the booth) to tell us a bit more about this lesser know Jets assistant coach.

The Hockey News:  Five problems – and solutions- for the disappointing Winnipeg Jets.  Matt wrote about the issues surrounding this team and the solutions which according to him include: 1) Goaltending. 2) Defensive health. 3) Cross-conference play. 4) Forward depth and 5) Coaching.

Illegal Curve:  Moose forward Anthony Peluso has surgery; likely done for season.  He hasn’t played since January 1st and last night we found out why.

Global News:  Moose suffer 5th straight loss.  Manitoba has held leads in all five of these games but despite all these close games they haven’t been able to hold on for the wins but coach Vincent is still happy with the effort from his team.