Note:  The Jets are in Arizona in perhaps one of the most critical games of the season as all eyes are on Winnipeg to see how they respond following Thursday’s 7-4 thrashing at the hands of the Habs.  They will hit the ice for a skate at 12:30 pm with puck drop at Gila River Arena at 8 pm.   As always be sure to keep it locked to illegalcurve.com for pre and post game news and on social media including via Twitter | Facebook | Instagram.

Note II:  The Moose are back home following a one game road trip to Arizona where they were handed their fourth straight loss.  They will look to rebound tonight in the first of two games this weekend at the MTS Centre against the Chicago Wolves.

The Hockey News:  Five problems – and solutions- for the disappointing Winnipeg Jets.  Matt wrote about the issues surrounding this team and the solutions which according to him include: 1) Goaltending. 2) Defensive health. 3) Cross-conference play. 4) Forward depth and 5) Coaching.

FRS:  Elliotte Friedman thinks Jets’ trade price for Trouba will eventually be met.  Chris transcribed a chat Friedman had today on Calgary’s Sportsnet 960 which touched on Trouba as well as other issues with the Jets.

TSN:  Laine was invited to 8-year-old Jets fans birthday on Twitter, surprises kid with special visit.  That is one way to make a fan for life.  Nicely done by the rookie.

Winnipeg Free Press:  Maurice expects solid effort in desert after Habs horror.  (Paywall).  When we inevitably look back on the 2016-17 season you will be able to include that game Thursday night along with the effort in Boston and home against the Islanders on New Years Eve in the column of ‘what the hell happened to the Jets?’.  We shall see if this team can bounce back from their poor performance.

Winnipeg Free Press:  Maurice cranked up the volume, but did the Jets hear him?  (Paywall).  It is certainly going to be interesting to see how this team performs over the course of the entire roadtrip.  They cannot simply play well in Arizona.  They need to have strong performances against the Kings and Sharks as well.

Winnipeg Sun:  The Jets need to start digging.  Missed this one from Paul as he puts on his hazmat suit to wade through the pile.

Winnipeg Sun:  Jets didn’t play hard enough.  Expect a lot of jump out of this squad as they will be (or should be) very motivated to play in tonight’s contest against the Coyotes.

Winnipeg Sun:  Morrissey has come a long way.  Having watched him in the AHL last season I wasn’t shocked that he has been able to make the jump but I am a tad surprised at how seamless it has gone and the fact that he is on the top pairing. 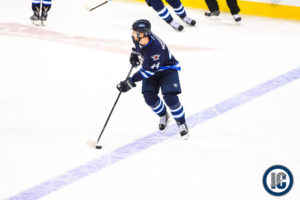 Sportsnet:  The Winnipeg Jets have a goalie problem, but should they acquire a new one?  This was supposed to be the year we no longer heard talk of goalie issues but that hasn’t been the case.  It isn’t as if the Jets D has been otherworldly either.  What would you like to see the Jets do?

Sportsnet:  Breaking down the second-year leap of Jets winger Nikolaj Ehlers.  If Ehlers wasn’t playing behind Laine and Scheifele he would be an absolute household name.  His skill and vision are off the charts and he has only continued to make huge strides in his game this season.

Illegal Curve:  Jets Injury Report.  We got an update the other day on Tyler Myers status and yesterday coach Maurice gave a bit of news on Patrik Laine.

TSN 1290 Winnipeg:  Donvito Roundtable.  TSN Jets analyst Shane Hnidy joins Rick Ralph and looks back on the Jets loss to Montreal and the lack of effort shown by the team.

TSN 1290 Winnipeg:  The Big Show.  Voice of the Jets Dennis Beyak joined the Big Show after an embarrassing performance in a 7-4 Winnipeg loss to Montreal to touch on what went wrong in the game, what changes need to be made moving forward and what the most concerning part of Wednesday’s loss was.