Note:  The Jets return from a day off and will hit the ice for a practice as they get ready to face the Sabres in Buffalo as they finish off this three game road trip.  Can they finally pull off the elusive three game win streak?  I’m sure there will be plenty of talk following skate.  As always keep it locked to illegalcurve.com for all the latest Jets news.

Note II:  The Moose will also hit the ice for a practice today following their day off on Thursday as they get ready for a weekend series with the Iowa Wild.  The Moose are 3-1-1 in their last five games and will be looking to keep ahead of their central division rivals in the standings.

Winnipeg Sun:  Jets have work to do at halfway point.  Ken puts on his teacher hat and hands out some mid term grades for Winnipeg.

Winnipeg Free Press:  Trouba turning into top-flight rearguard.  (Paywall).  To think some believed the Jets didn’t need the 2013 1st round pick.  Jeff writes about the defenceman’s play this season. 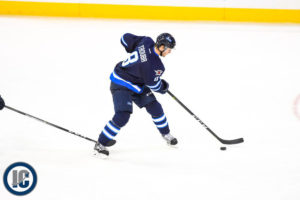 Winnipeg Free Press:  Improving Leafs could teach Jets a few things.  (Paywall).  Former NHLer Scott Campbell compares how this Jets squad measures up against the prospects on the Leafs.

Winnipeg Free Press:  Scheifele quietly, solidly at centre of things.  (Paywall).  Sometimes having everyone’s attention on someone else isn’t a bad thing.

Metro News:  Winnipeg’s road to playoffs paved with every little point.  Has this team “survived enough” to keep the playoff push alive?  Guess we will find out.

Illegal Curve:  No supplemental discipline for Nikolaj Ehlers after hit on Seth Griffith.  Panthers head coach Tom Rowe was clearly miffed following the game but the Jets winger skated away without receiving any post-game penalties.

TSN 1290 Winnipeg:  Hustler and Lawless.  Jets analyst JP Vigier joins Hustler & Lawless to look at the Jets at the halfway mark of the season. Vigier says that, with the infusion of youth this season, Winnipeg still needs to develop more consistency.

Illegal Curve:  Moose centre Jack Roslovic named to AHL All-Star game.  And he also happened to win World Junior gold so something tells me that yesterday was quite a special day for the Jets prospect.