Note:  The Jets have the day off following back to back wins in Florida on Tuesday and Wednesday.  They will hit the ice again on Friday in Buffalo at 1 pm for practice as they get ready to face the Sabres on Saturday afternoon.

Note II:  The Moose also have the day off today following their back to back games (win and a loss) against the Marlies this week.  They too will resume practice on Friday at MTS Centre at 11 am as they get ready for a weekend series with the Wild on Saturday/Sunday as they close out this six game home stand.

Metro News:  Winnipeg’s road to playoffs paved with every little point.  Has this team “survived enough” to keep the playoff push alive?  Guess we will find out.

Winnipeg Sun:  Jets tame Panthers.  Ken gives you quite a bit to digest in his game breakdown.

Winnipeg Free Press:  Jets get back to .500 on season with 4-1 win over Panthers.  (Paywall).  A look back at the Jets win that helped them get back onto a roll as they look for that elusive third win in a row.

Sun Sentinel:  Jagr achieves another milestone in 4-1 Panthers’ loss to Jets.  Always good to get the perspective from a beat writer who covers the team the Jets played.

Miami Herald:  Panthers lose another one at home, this time to the Jets.  Another opportunity to read a recap from a writer who covers Florida. 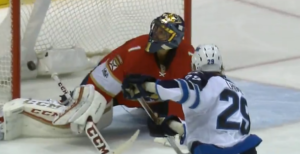 Illegal Curve:  Evaluating Jets game 31-40.  A look at goal scoring, goalies, special teams and injuries prior to last night’s game against the Panthers.  Of course if the Jets can play their next block of ten like they did in game 41 they will make their fans quite happy.

Global News:  3rd period surge by Toronto Marlies pushes them past Manitoba Moose.  It looked like the Moose had flipped the script on Toronto from the night before and perhaps they did too well as they ended up losing by a goal.