Note:  The Jets will hit the ice for practice as they try to get back on track following a tough loss to one of the best teams in the NHL.  Former captain Andrew Ladd is back with the Islanders this time for the New Years Eve game.

Note II:  The Moose are back in action tonight as they look to win their first game following the holiday break.  They will be hosting the Checkers (puck drop at 7 pm) for a pair of games as they look for revenge against a Charlotte team that beat them twice back in the middle of December.

Winnipeg Sun:  Another step back for Jets.  It looked, early on, like the Jets were more than ready for the Jackets holding a 7-0 shot advantage and a 1-0 lead but Columbus wore Winnipeg down.  A lack of discipline hurt both teams in this contest. 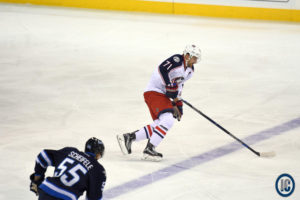 Winnipeg Free Press:  Jets fall victim to Blue Jackets wild winning streak.  (Paywall).  While the Jets, once again, failed to achieve a third win in a row it wasn’t as if they lost to a team that wasn’t the hottest in the league.  One that has now won 14 straight games.

Winnipeg Free Press:  Tortorella’s influence makes Columbus one of NHL’s hottest teams.  (Paywall).  He certainly deserves praise for the impact he is having on this squad as he continues to get the most out of his players.

Winnipeg Free Press:  Jets’ 2016 highlights not reflected in points total.  (Paywall).  Former NHLer turned writer Scott Campbell reflects back on the year that was for the Jets franchise.

Columbus Dispatch:  Columbus sets franchise record of 14 straight wins.  Read about the game from a beat writer that covers the Blue Jackets.

TSN: Columbus is playing the ultimate team game. (Video). After the Blue Jackets won their 14th in a row, Sara Orlesky and Gary Lawless look at what has been going right for the Blue Jackets during their streak, and preview their next game, which comes against the equally hot Wild on Saturday.

Sportsnet:  Winnipeg sports year in review.  (Video).  2016 was a year of hope for the Winnipeg sports scene, with the Jets adding phenom Patrik Laine to an already good young core, and the Blue Bombers.

Illegal Curve: Marko Dano suffers lower-body injury.  We get an update from a less than optimistic Jets coach Paul Maurice on the status of Dano who left the game after crashing into the boards in the 2nd period.

Winnipeg Free Press:  Manitoba assistant coach rooting for son, No. 3 draft pick Dubois, at world juniors.  (Paywall).  Mike had a chance to speak to some of the players as well as Eric Dubois about their World Junior memories.