Note:  After playing 32 games in 60 days (the fastest of any team), including a difficult 3-2 loss last night to the Oilers, the Jets will have a day off today before they ease into an lighter schedule moving forward.  This week, in fact, they will practice tomorrow and Wednesday before they play the Panthers on Thursday at the MTS Centre.

Note II:  The Moose head out on the road today for a five games in seven days road trip.  They will play the Checkers tomorrow and Wednesday.

Winnipeg Sun:  Jets find another bizarre way to lose.  I might replace the word bizarre with heartbreaking as that appeared to be a solid bounce back game for Winnipeg and to lose it in that manner has to sting.  Ken recaps the contest. 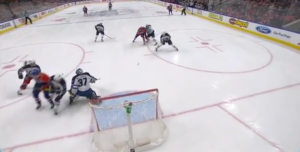 Winnipeg Free Press:  Oilers too slick for falling Jets.  (Paywall).  One thing worth remembering is this isn’t a hapless Oilers team anymore.  They are currently tied for first in the Pacific division with Anaheim.

Edmonton Journal:  Oilers battle back against Jets for 3-2 victory.  Always find it interesting to read what the beat writer who covers the Jets opposition has to say following the game.  Here is that recap.

Sportsnet:  Patrik Laine’s own goal a blip in the grand scheme of things.  While it seems huge in the Jets present circumstances I agree that the totality of this one even is fairly minimal.

Sportsnet:  Don’t want to win like that but we will take the two points.  (Video).  Cam Talbot talks about getting the win over the Winnipeg Jets and Patrik Laine scoring on his own net.

TSN:  Wheeler shows why he is captain.  (Video).  No one in the Jets’ locker room is going to blame Patrik Laine and his own goal for the own goal and TH2N says that the way the team reacted speaks volumes about the team’s leadership.

TSN:  Laine has moment to forget.  (Video).  The Jets got the start they were looking for against the Oilers but a lapse in concentration from Patrik Laine sunk Winnipeg. Dennis Beyak and Shane Hnidy discuss.

Illegal Curve:  Manitoba Moose Practice Report.  I was down at the MTS Centre yesterday for the final day of practice for the Moose in Winnipeg before they hit the road.  Includes a look at the upcoming schedule, players back on the ice and post-practice audio from Coach Vincent, Jack Roslovic and Jimmy Lodge.