Note:  The Jets left Calgary having been rather easily defeated by the Flames 6-2 last night.  If this team doesn’t come out snarling against Edmonton tonight then it is going to make for a long flight home.  Make sure you keep it  locked to illegalcurve.com for pre and post game news and on social media including via Twitter | Facebook | Instagram.

Note II:  The Moose will have one final day of practice today at the MTS Centre before they head out on the road for a five games in seven days road trip prior to the holiday break.

Winnipeg Sun:  Jets flame out.  Once again a poor middle frame sinks this club which overall are now 43-20 in the 2nd period this season.  Ken breaks it all down in his recap of the game.

Winnipeg Free Press:  Damn the back-to-back games, full steam ahead.  (Paywall).  Not sure if its full steam at this point.  Time for one of these two to step up and seize the role of #1 goalie on this team. 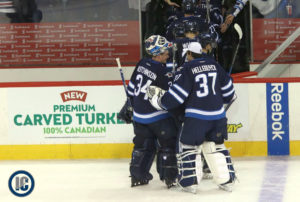 Calgary Herald:  Flames continue winning ways with rout of Jets.  Six wins in a row for this really solid Flames team that hasn’t seen their flame flicker at all in the last month.  Read about the win from a beat writer that covers Calgary.

Sportsnet:  After Hours with Patrik Laine. (Video).  Patrik Laine joins After Hours to talk about his first year in the NHL, his time in Finland and take Twitter questions.

Sportsnet: Mark Scheifele lives and breathes hockey every day.  (Video).  Mark Scheifele spends almost every waking moment talking, or thinking about hockey and when it comes to success, he’ll do anything and everything to be considered one of the league’s best.

Winnipeg Free Press:  Pavelec shines for Moose in shootout loss.  While he has been subjected to criticism for his on ice play you cannot question his attitude since being assigned to the minors.

Global News:  Connor scores first AHL goal but Moose end homestand with loss to Monsters.  Crazy notion.  Give a young, talented player the opportunity to play big minutes and he will thrive.