Note:  The Jets will try to forget the loss to the Oilers which was a poor way to end a good homestand as they try to take out their frustrations on a very good Blues team tonight in St. Louis.  The Blues are second in the Western Conference and have been deadly at home going 11-1-2 at the Scottrade Center.  Puck drops at 6 pm.  Keep it locked to illegalcurve.com for pre and post game and on social media including via Twitter | Facebook | Instagram.

Note II:  The Moose have spent quite a bit of time on the road but will play their next four games at home where they are 5-2-1 in eight games.  Today they face a Texas team that has put up an identical record in 19 games in the Star Wars themed contest with a 2 pm puck drop.

Winnipeg Sun:  Byfuglien front and centre as Jets try to spark PP.  Had to like big #33’s response to whether or not he liked being in front of the net on the PP “It was either that or go sit on the bench”.  Should the Jets continue to use 33 as net front presence?  They currently sit 19th overall although if they keep 29 in his go to spot something tells me the Jets PP will be just fine. 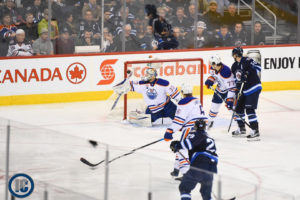 Winnipeg Sun:  Jets must get discipline in check.  As we saw with the game against the Oilers you cannot afford to spend time killing penalties and giving teams an opportunity to get into the game.

TSN:  Laine’s flying start has wowed veteran teammates.  Pierre Lebrun caught up with the Jets captain to talk about some of the kids and we learn another nickname for Patrik Laine or as he is known back home “Pastyuk.”

TSN:  How Laine is fooling opposing goalies.   (Vide0).  Leafs Lunch guest host Mark Roe and co-hosts Dave Poulin and Patrick O’Sullivan are joined by TSN Hockey Insider Pierre LeBrun to discuss Patrik Laine’s ability to find space for himself and how he appears to be fooling goalies with his shot.

NHL.com:  Patrik Laine’s confidence good sign for Jets.  He continues to show Jets fans the kind of sizzle and it bears mentioning that he is only 18.  Tip of the iceberg really for what lies ahead.

Illegal Curve:  Winnipeg Jets Practice Report.  Some info on what the Jets did at yesterday’s practice before they departed for St. Louis and audio from coach Maurice, Patrik Laine, Dustin Byfuglien and Mark Scheifele.

Illegal Curve:  The rise of Winnipeg Jets winger Nikolaj Ehlers.  While he hasn’t light up the back of the net with many goals this season the Dynamic Dane has not been subjected to the dreaded sophomore jinx in his second professional season.

TSN 1290 Winnipeg:  Donvito Roundtable.  Chase De Leo discusses the upcoming Star Wars game at MTS Centre, his second year as a pro, the success the Moose have had, and the team’s leading scorer Jack Roslovic.