Note:  The Jets are scheduled to practice today at the IcePlex at 12 noon.  But we will have to wait and see if coach Maurice goes through with it following their second win in a row last night over the visiting New Jersey Devils 3-2 at the MTS Centre.  Either way there will be audio post noon today so be sure to keep it locked to illegalcurve.com for the latest news.

Note II:  The Moose finish off their three game road trip tonight against Rockford at 7 pm.  They are looking to go a perfect three wins and no losses against their Central Division rivals during this trip.  NHL This Week with Illegal Curve moves to 10 pm tonight  the conclusion of the Manitoba Moose game on TSN 1290 Winnipeg.

Official Jets site:  Reinforcements arrive as Jets prepare for Oilers.  Ryan brings you up to speed with some of the Jets news that took place this afternoon.

Winnipeg Sun:  Laine gets winner as Jets hang on for second straight win.  Everyone contributed last night in what felt like a bit more of a complete game by Winnipeg.  Bryan Little made his presence felt from the opening whistle, Scheifele had a goal and assist to move back into a tie for second overall in NHL scorin, while Patrik Laine scored his 13th (he and 55 are now tied for second overall, two behind Crosby).  Connor Hellebuyck was also perfect through 40 minutes and allowed two goals on 25 shots. 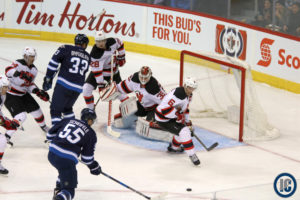 Winnipeg Sun:  Jets call-ups fighting to stick with team.  Really is going to be interesting next week when most of the troops are scheduled to be healthy.  Who goes to the AHL?  Who goes to the pressbox?  And who gets into the lineup?  Ted gives his projected at the end of the article.

Winnipeg Free Press:  Big game for Little.  Should there be a moratorium on using ‘Big’ when referencing Bryan Little or his game?  We get it, he had an impact on the game.  One could even say it was a large impact.

Winnipeg Free Press:  Laine’s 13th goal of season proves the winner for Jets.  (Paywall).  I tweeted post-game that it seems whenever there is visiting Finnish media the talented rookie scores a goal.  Perhaps he is wanting to give them good quotes for their articles back in Finland (like last night when he described his goal to Sami Hoffrén as “Top shelf where grandma hides the jars of jam”).

CBC:  13 proves lucky for Scheifele, Laine as Jets bounce back against Devils.  The top end of the Jets lineup proved to be the difference makers in last night’s contest.  Judy brings you this recap of the events.

NorthJersey.com:  Rookie Wood scores but Devils lose 3-2, at Winnipeg.  I always find it pretty interesting to read the game recap from the beat writer that covers the Jets opposition.

Illegal Curve:  Injury news – Marko Dano is day-to-day.  It never looks good when a player is down on the ice for any length of time.  While coach Maurice didn’t make it sound too bad it will bear watching.