Note:  The Jets had a day off yesterday and will have their first practice today in about a month.  Update:  Following today’s skate in Minnesota we heard from Adam Lowry, Drew Stafford, Patrik Laine, Mark Scheifele and coach Maurice.  To listen click here and we also got injury updates from coach Maurice which you can read here.

Note II:  The Moose face the Wild tonight at 7 pm.  This is the first time Manitoba has played here in two weeks and they left Winnipeg having won their last four games in the friendly confines of the MTS Centre.

Winnipeg Sun:  Jets hanging in at season’s quarter-point.  Kenny breaks out his teacher’s grading system for the Jets.

Metro News:  Heritage Classic street banners among Jets cancer-fighting auctions.  Any way to fight (by raising money) against this awful disease is good when the proceeds raised can help fund research.

Winnipeg Free Press:  Banged-up Jets running on fumes.  (Paywall).  Not a lot of room for error or injury with this squad. 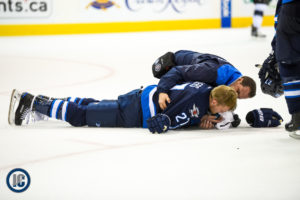 TSN 1290 Winnipeg:  Hustler and Lawless.  Paul Edmonds discusses the weekend’s Jets losses in Boston and Carolina and says that Monday was a day of much needed rest for the team.

TSN 690 Montreal:  The Morning Show.  Bob McKenzie of TSN joined the show yesterday and spoke about the Jets/Trouba (starts at 4:00 minute mark) and continues the conversation about the Jets youth, goaltending and how good this team can be (goes until the 9:00 minute mark).

Winnipeg Sun:  Moose coming to grips with terrifying incident.  It was a shell shocked group of players we spoke to following practice on Monday.

Winnipeg Free Press:  Moose players shaken after opponent collapses, nearly dies on ice.  (Paywall).  As young men in prime shape it is somewhat incomprehensible for these guys to think of their own mortality but that’s exactly what was staring them in the face on Saturday.

Global News:  Moose in shock after seeing Tucson Roadrunners captain collapse.  The shock is still evident when looking at the expressions on their faces.

Illegal Curve:  Moose Practice Report. Some insight into how practice looked, who was missing and an injury update.

Illegal Curve:  Moose reaction to Craig Cunningham collapsing on ice.  Prior to finding out that Cunningham is in stable but critical condition we had spoken to some pretty shaken up players on the Manitoba squad following this incident on Saturday.  Includes audio from Ondrej Pavelec, Patrice Cormier, JC Lipon, Brenden Kichton and coach Vincent.

Winnipeg Jets Morning Papers
Who will the Jets protect in the Expansion Draft?