Note:  The Jets kick off their five game in 10 day road trip against the Flyers in Philadelphia tonight.  Puck drops at 6 pm.  Read our pre-game report here which includes projected lines for both squads and pre-game audio.  Stick with illegalcurve.com for the latest news and on social media including Twitter|Facebook |Instagram for all the pre and post game news.

Note II:  The Moose departed California for Arizona with one win in three games but will hope to ride the success of yesterday’s 4-1 win over Bakersfield.  Manitoba will hit the ice for a 2 pm practice today as they get ready for their next game against the Roadrunners on Friday in Tucson.

NHL.com:  Mark Scheifele grows into leadership role for Jets.  He is certainly no longer that kid in the picture from 2011 much to the delight of Jets fans.

NHL.com:  Toby Enstrom – The Renaissance Man.  He certainly has seemed rejuvenated this season.

Winnipeg Sun:  Long road ahead for Jets.  That song “the road is long” popped into my head when I read the headline.  Ken outlines the path forward for Winnipeg. 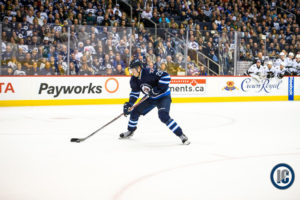 Sportsnet:  Early NHL award predictions.  (Video).  With the NHL season just over a month old, Elliotte Friedman along with some former NHL players and execs give their predictions on this year’s Calder, Vezina and Jack Adams winners.

Sportsnet:  30 Thoughts.  Just one Jets note and it is with respect to prospect Pavel Kraskovsky in thought 24.

Illegal Curve:  How good are these Winnipeg Jets?  As the Jets got ready to depart for their longest road trip of the season I took a look at some of the factors that have propelled this team to second spot in the Western Conference including the play of Mark Scheifele, the scoring of Patrik Laine and the goaltending of Connor Hellebuyck.

ESPN:  Hockey Today.  Mark Scheifele chats with Scott Burnside about being the current NHL scoring leader, acting as a role model to young teammate Patrick Laine, playing alongside Connor McDavid in the World Cup of Hockey and more.

TSN 1290 Winnipeg:  Donvito Roundtable.  JP Vigier talks with Rick Ralph about the Winnipeg Jets 4-0 win vs. Chicago and how the Jets youth has impressed early on.

TSN 1290 Winnipeg:  The Big Show.  Play-by-play man Paul Edmonds joined the Big Show to break down the Jets 4-0 win over Chicago including the excitement surrounding the team, Connor Hellebuyck’s continued strong play and what the victory means for the team which now sits second in the Western Conference.

Official Manitoba site:  Recap of Moose 4-1 win over Condors.  Daniel breaks down the entire contest for you.

How good are these Winnipeg Jets?
Game 19: Jets vs. Flyers pre-game report