Note:  The Jets are returning home from Colorado today and have the day off as they get ready for a Sunday afternoon contest with the Buffalo Sabres.

Note II:  The Moose and the Gulls will do battle in a re-match tonight at the MTS Centre as Manitoba goes for the weekend sweep over San Diego.  Puck drops at 7 pm.

The Hockey News:  Ovechkin says Jets’ rookie Laine can score ’50 or 60 goals’.  I asked Capitals play by play voice Joe Beninati what he thought about Laine and his response was “brings me back 12 years ago.  The speed with which he attacks the net.  The shot that he takes.  It reminds me of #8”.  (Interview with Joe starts at 25 minute mark and my question about Ovechkin/Laine is at 28:18).

TSN:  Teams inquiring about Jets’ Pavelec.  If coach Vincent keeps up the rotation we should be seeing Pavelec make the start tonight for Manitoba.

Winnipeg Sun:  Jets hang on to top Avs.  Hutchinson was dominate in the critical central division win over Colorado which was the second win in a row for a Jets team hoping they have worked out some of their kinds and are now trending upwards. 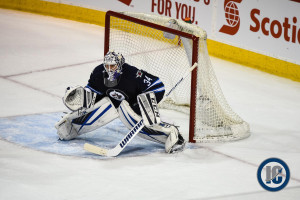 Winnipeg Free Press:  All downhill for Avs after one goal.  (Paywall).  What can you say about Joel Armia.  He has played well all season long, even more so after he experienced a little time up in the press box, playing two of his best games of the year in the last two Jets contests.

Denver Post:  Avalanche stymied by Jets as Michael Hutchinson has 37 saves.  Read about the game from the perspective of an Avalanche beat writer.

TSN:  Dreger Report – Lots of love for Laine.  No surprise with the way he’s been firing the puck that the love is free flowing.

Illegal Curve: Coach Maurice post-game.  Head inside the Pepsi Center to hear from the Jets bench boss as he breaks down the 1-0 win over Colorado.  Plenty of praise for his goalie in this one.

Winnipeg Free Press:  Moose down Gulls in OT thriller.  (Paywall).  There was plenty of excitement inside the MTS Centre last night as Manitoba came from behind to win it last night.

Moose win it in OT. Who else but Chase De Leo with the assist over to Kosmachuk for the win. #MBMoose pic.twitter.com/KdA5FKL5zM

Winnipeg Free Press:  Roslovic wastes no time making mark with Moose.  (Paywall).  The importance of the AHL as a developmental league is perfectly exemplified by a player like Roslovic.  He has all the tools to play in the NHL eventually but will really benefit by honing his skills in the AHL.