Note:  Day 11 of training camp will see the fifth pre-season game as the Jets are back in town following last night’s 4-0 win in Calgary to do battle with the Senators (puck drop at 7 pm).  As per usual we will be covering the game so keep it locked to illegalcurve.com and on social media including Twitter| Facebook | Instagram for pre and post game news.

Winnipeg Sun:  Jets top line reunited for first time in pre-season.  It’s like that 1978 Peaches & Herb song Reunited -“Reunited and it feels so good Reunited ’cause we understood There’s one perfect fit And, sugar, this one is it” or so Jets fans hope.

Sportsnet:  Ranking the top 20 centres in the NHL, by the numbers.  Lucky #13 for Mark Scheifele.

USA Today: 10 NHL Storylines. Jets and Trouba are number four on this list.

Illegal Curve:  Which goalies should kick off the season for the Winnipeg Jets?  A look at the numbers from last season and all the questions that have arisen during training camp as to who we may see as the goalie duo to start the year.

TSN 1290 Winnipeg:  Hustler and Lawless.  Paul Wiecek of the Winnipeg Free Press joins Hustler & Lawless to discuss what the Jets should do for goaltending between Ondrej Pavelec, Michael Hutchinson, & Connor Hellebuyck.

TSN 1290 Winnipeg:  Hustler and Lawless.  Micah Blake McCurdy of HockeyViz joins Hustler & Lawless to discuss his season predictions. McCurdy explains how he arrived at his conclusions, and expects the Central Division to be highly competitive.

Winnipeg Sun:  Jets blank Flames.  Plenty to digest in Ken’s breakdown of the Jets win over the Flames last night.

Winnipeg Sun:  Copp owning faceoff circle for Jets.  Andrew Copp knew he needed to be better in the faceoff circle, so he went out and did something about it. 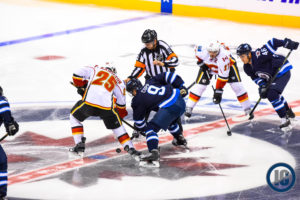 Winnipeg Sun:  Laine’s shot has Jets’ coach Maurice salivating.  You can count Paul Maurice among those who wasn’t the least bit concerned Patrik Laine was held without a point in his preseason debut with the  Jets.

Winnipeg Free Press:  Kid-line comes through for Jets.  (Paywall).  Lots of familiarity between De Leo, Lipon and Kosmachuk which showed in last night’s win over Calgary.

Winnipeg Free Press:  Coach admires Laine’s candor leading up to pre-season debut.  (Paywall).  I’m with coach Maurice that it is refreshing to hear a player being open with his thoughts.

Calgary Herald:  Flames loss to Jets a nightmare for Calgarian in net.  Read about the game from the perspective of a Flames beat writer.

TSN 1290 Winnipeg:  Hustler and Lawless.  Ken Wiebe of the Winnipeg Sun joins the shpw to preview the Winnipeg Jets preseason game in Calgary. Wiebe says Sunday night is likely the last opportunity for ‘bubble players’ to make a lasting impression.

Illegal Curve:  Coach Maurice post-game scrum.  Topics include – Getting the De Leo line going.  What did he like about the De Leo, Lipon and Kosmachuk line?  Thoughts on Pavelec?  Thoughts on Mark Stuart?  Thought on Josh Morrissey on the right side?

Winnipeg Free Press:  Moose hunting a lot more wins.  (Paywall).  As we are seeing in these Jets games there will be plenty of talent on the Jets AHL squad this season.