Note:  Fans had been wondering when the NHL may reveal the Jets and Oilers jerseys as well as the rosters for the Heritage Classic but wonder no more as tomorrow at noon at the iconic Portage and Main all will be revealed.  As per usual we will be covering all the latest news.  Be sure to follow us on social media for breaking Jets news including: Twitter|Facebook | Instagram.

theScore:  Ranking the 31 General Managers.  Writing 31 just feels odd.  Anyways, while we sit in the doldrums of summer the guys over at the Score ranked the GMs and Kevin Cheveldayoff scored a top 10 spot. 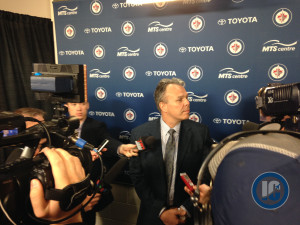 Metro News:  Owners place ad looking for spot for Winnipeg Arena’s massive Queen Elizabeth II portrait.  I’m not anti-monarchist but think it is time the Queen talk (with exception of the dude who dresses up at Jets games as the Queen) to be put back into the warehouse (or a local museum).

Official Manitoba site:  Finish builds confidence.  It was quite a way to end the 2015-16 season for Jimmy Lodge and he is looking to roll that late season success into more for the 2016-17 season.