Note:  The prospects have completed all of their on and off ice drills as Jets Development Camp came to an end on Thursday.  Many will return back to their summer homes as they get back into training mode.  We won’t see them again until around September 10th when a number of player will prepare to head to Penticton BC for the YoungStars Classic.  Jets training camp will get underway about ten days later.

Note II:  As many heard yesterday the Jets signed Mathieu Perreault to a four year contract extension.  You can hear from Jets GM Kevin Cheveldayoff and Head coach Paul Maurice speaking about the extension.

Winnipeg Free Press:  Week at camp shows cupboards are stocked.  (Paywall).  Plenty of good pieces on the Jets chess board. 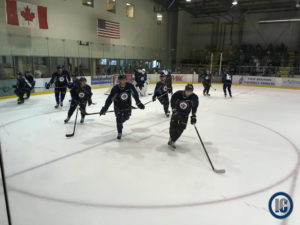 Winnipeg Free Press:  Jets extend Perreault for four years, $16.5M.  (Paywall).  The news was somewhat expected as there had been word for awhile that the Jets and Perreault were wanting to getting a deal done.

Winnipeg Sun:  Stanley struts his stuff.  He came in with some nerves but by the end of the week he was feeling a lot more comfortable.  Ken also covers Connor’s challenge, Rowe has special distinction and Around the Glass. 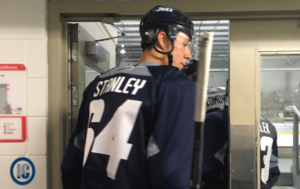 Winnipeg Sun:  Jets sign Perreault to new deal.  Ken offers up his thoughts on the extension of the versatile Perreault.

Sportsnet:  Jets’ window of opportunity opening sooner than later.  Plan the parade earlier than 2019 apparently.  Still many things need to go right but the boost of the second overall pick definitely accelerates the Jets plans.

Illegal Curve:  Kevin Cheveldayoff scrum.  Topics included – His initial thoughts on the week.  On the players learning to be professionals.  What has he learned about Logan Stanley in the days following the draft?  Having Paul Maurice run a day of the camp.  Where will Sami Niku play this year?  Is there less pressure on Kyle Connor going into camp with all the Patrik Laine hype?  What is the status of Pavel Kraskovsky?  Where will Mikhail Berdin play?  Status of Marcus Karlstrom?  From year one to this point, a look at the talent in the pool.  Open to adding another UFA D?  Mathieu Perreault contract extension announcement.  What is the biggest thing he has brought to the organization since he came over from Anaheim?  Does he like the forward depth of his team?

Illegal Curve:  Kyle Connor and Logan Stanley.  Following the final scrimmage of the 2016 Development Camp (won by blue side 6-4) we spoke to a couple of the Jets 1st round draft picks from 2015 and 2016 respectively.

Illegal Curve:  Peter Stoykewych signed to a one-year AHL contract.  The local boy is staying local for at least one more year.