Note:  While it won’t be nearly as frenetic a pace as yesterday free agency is still open so be sure to keep it locked to the site for all the latest Winnipeg Jets news.

Note II:  Remember that the Jets Development Camp begins tomorrow and runs until Thursday.  I will be down for quite a bit so be sure to follow us on our various social media platforms including twitter @illegalcurve and instagram.

Winnipeg Free Press:  Jets hopefuls will strut stuff at development camp Sunday.  (Paywall).  Interesting that none of the players to participate will have any NHL experience. 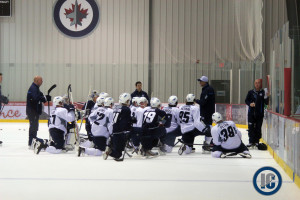 Winnipeg Sun:  Howden gets happy homecoming.  His response about telling his family he was coming back to Manitoba to play for the local team was quite humourous.

Winnipeg Sun:  Shawn Matthias first free-agent snag for Jets.  I’ve never heard a player so enthused about joining a team during a conference call.  It was pretty clear that Matthias is excited to play on a Canadian team.

TSN 1290 Winnipeg:  Donvito Roundtable.  Gary Lawless discusses the Winnipeg Jets signing of Shawn Matthias, any future moves the Jets might make, and his top signing of the day.

Illegal Curve:  Quinton Howden conference call.  The local kid gets a chance to to put on the home jersey after being cut loose by the Panthers (they didn’t qualify him).

Illegal Curve:  Manitoba signs five.  Will be interesting to see what Jake Baker brings when healthy and being able to reference Jiri “you gotta be Fronking kidding me” Fronk will make the press box an entertaining spot.

Illegal Curve:  Renew affiliation with Tulsa Oilers.  We kicked off the free agency period a bit early with news that the Jets/Moose were extending their connection with their ECHL affiliate for another year.