Note:  Day two of the NHL Entry Draft in Buffalo begins today at 9 am CT.  Barring a trade the Jets won’t be making a pick until the 3rd round when they pick 79th overall courtesy of the trade they made yesterday with the Flyers.  Once again be sure to keep it locked to Ezra and myself as we will bring you all the latest from First Niagara Center.

Winnipeg Free Press:  Jets trade up to grab gigantic defenceman.  (Paywall).  You have to look way up to meet the eyes of the 6’7 Logan Stanley who the Jets jumped four spots to pick. 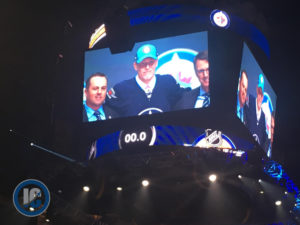 Winnipeg Free Press:  Phenom Patrik Laine is ultra-skilled flag-bearer for Finland’s all-new philosophy. (Paywall). I had an interesting chat with some Finnish reporters in advance of the draft and they were quite determined to differentiate Laine from many other previous Finnish young prospects.  Well with the exception of one that Jets fans are rather familiar with.

Winnipeg Sun:  Jets trade up to get Stanley.  This seems to be a somewhat controversial pick by Winnipeg with the stats based fans thinking it was an error by the club.

Winnipeg Sun:  Jets select Laine.  While there may have been some doubt the Jets GM put that to bed when he announced the selection was from Tampare.

Winnipeg Sun:  Bomber fans cheer Laine.  Sounds like the home team didn’t give them much to cheer about so may as well have enjoyed some part of their evening.

TSN:  Heritage Classic will have distinct Finnish flavour.  It takes what would already be a special weekend in Winnipeg and adds a bit more drama to the event.

Sportsnet:  Patrik Laine and Winnipeg have always been a perfect fit.  Now he just needs to score 76 goals as a rookie next season and fans will be tickled pink.

CBC:  Q & A with new Winnipeg Jets player Patrik Laine.  (video).  Little one on one chat with the first member of the Jets organization from the 2016 draft class.

Illegal Curve:  Patrik Laine.  We have audio, video as well as full transcription from the post selection scrum we held with the Jets 2nd overall pick.

Illegal Curve:  Logan Stanley.  Had a bit of a technical malfunction so I have video (with audio) of the Jets 18th overall pick but no separate audio link.

Illegal Curve:  Kevin Cheveldayoff.   The Jets GM wrapped up the day which includes his selection of Patrik Laine, his trade to move up to get Logan Stanley and more.  Includes both video and audio.