Note:  Kick start your Saturday with the Illegal Curve Hockey Show on TSN 1290 Winnipeg starting at 9 am for plenty of hockey talk.  Guests: Brendan Ross (Director of Scouting for TheScout.ca), Cary Eades (Head Coach & GM of the Fargo Force of the USHL) and David Pagnotta (Editor-in-Chief of Hockey’s Lifestyle Magazine).

Sportsnet:  Could Laine be a better NHLer than Matthews? Three scouts weigh in.  Interesting perspective from the scouts.

NHL.com: 1-on-1 with future 2016 first round pick Patrik Laine.  (video).  Less than a week until fans will likely hear this name get called up to the podium to put on his Jets jersey. 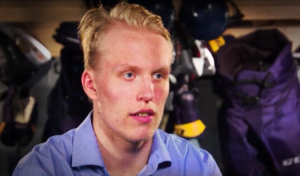 Illegal Curve:   The Fair Market Value of Mark Scheifele.  An in-depth look at what the RFA may get when he signs on the dotted line with the Jets for his next contract.