Game 1 today will see Russia take on the USA for Bronze.  The Jets have three possible players for this game but all three are questionable.  Alexander Burmistrov and Kyle Connor were both missing from the Semi-Finals yesterday while Ivan Telegin was slashed in the 3rd period and looked to be in considerable pain.

Update:  Burmistrov didn’t play.  Kyle Connor got back into the lineup but didn’t get any shots on goal.  Telegin, who appeared to be incapable of moving after a 3rd period slash against Finland yesterday not only played today but scored in the Russian demolition of Team USA.  Russian wins the bronze medal by a final score of 7-2.

Game 2 will have the Canadians looking to defend their World Championship title against a Finnish team attempting to pull off the rare triple crown victory (world juniors, under-18 and world championship).  Mark Scheifele will battle against Patrik Laine for potential Jets training camp bragging rights.

Update:  Patrik Laine picked up tournament MVP but Canada and Mark Scheifele walked away with the gold meal following a solid 2-0 victory that saw the defending champs defend their title.

TSN:  Laine won’t wash jersey after Ovechkin hit (video).  Patrik Laine admitted earlier in the tournament that his favourite player is Alex Ovechkin and after getting hit by the Russian captain during their semi-final, Laine joked that he would never wash his jersey. 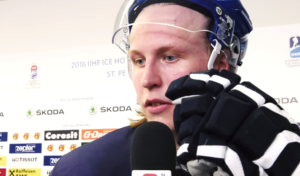