Note:  The final Jets road trip kicks off tonight at Anaheim with a 9 pm puck drop.  Be sure to keep it locked here for the latest Jets news. As soon as illegalcurve.com is updated we will also notify you via Twitter | Facebook | Instagram.

Note II:  The Moose kick off their final home stand of the season as they play host to the Milwaukee Admirals tonight at the MTS Centre.  If you attend the game you will get a chance to see Brendan Lemieux and Jansen Harkins make their AHL debuts.

TSN:  Canadian teams and the road to respectability.  Gary sees the Jets as back in the playoffs in two years time.  Agree or disagree?

Winnipeg Free Press:  Jets lock themselves out of cellar, keep winning, not the draft, in mind.  (Paywall).  More on the players not wanting to finish dead last, despite what some fans may hope so as to achieve a better draft spot.

Winnipeg Sun:  Tanev set to make NHL debut.  Unbelievably he will be the 11th rookie to make his debut for the Jets this season and it will be interesting to watch him get into his first NHL game tonight.

Winnipeg Sun:  Three Jets rookies share some of their most memorable moments of the season.  Paul chatted with Ehlers, Copp and Petan and got them to talk about everything from their best games, biggest surprises, thoughts on Winnipeg and a lot more. 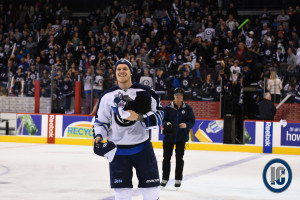 Winnipeg Sun:  Jets players have no interest in tanking for the Draft.  Not a surprise that players like Adam Lowry won’t countenance the idea of losing for the ‘greater purpose’.

Winnipeg Sun:  Jets need better goaltending to take next step.  Lots to read in Ken’s column on the status of the Jets goalie situation and the changes we will need to see next season.

Winnipeg Free Press:  Jets, Moose give call-ups a chance to impress.  (Paywall).  We are at that point in the year when organizations in the Jets position are looking to the future and seeing what they have in their young prospects.

CBC:  And the winner is … Adam Wazny dishes out unofficial Jets awards.  While the season isn’t yet over he hands out some hardware including Most Valuable Player, Most Underrated Player, Rookie of the Year, Moose call-up of the year, Norris Trophy, The complete disaster award, Biggest off-ice news story and The bad memory/heartbreaking moment of the year award.

NHL.com:  Connolly Gamble has wish granted with help from favorite team.  Pretty heartwarming story for a young boy who had his wish granted by the Jets.

Illegal Curve:  Coach Maurice scrum.  Thoughts on the roster news.  How much time does he have to watch on prospects?  Different with college players?  A role for Lemieux next year?  Has he gotten answers on what Copp could be?  Does he put a lot of stock in +/-?  On players not wanting to finish last.  Pride in not finishing last.

Illegal Curve:  Focus on Brendan Lemieux.   I went one on one with the newest member of the team as well as with head coach Keith McCambridge on what he expects from the young prospect.