Note:  The final Jets home contest is upon us as the Jets take on southern rival Minnesota Wild at the MTS Centre.  Reminder that puck drops at 7 pm (originally was scheduled for 6 pm) although we’ve been told doors open  at 5:30 pm (usually it is one hour before puck drop).  Tonight is Bryan Little bobblehead giveaway and for the second time since the Jets have done this giveaway the bobbleheadee will not be in the lineup so we won’t know if the Curse of the Bobblehead is in effect. (although it appears to be a reverse curse for when they are out of the lineup).

Note II:  The Moose will practice today at the IcePlex as they get ready for a four game home stand to close out their AHL home schedule.  Manitoba will be joined by Jets 2015 2nd round pick Jansen Harkins who signed an ATO yesterday.

Winnipeg Free Press:  Petan’s play drawing attention.  (Paywall).  He has been given more rope by the organization but he is also showing the impact a full season in the AHL can have on a young player. 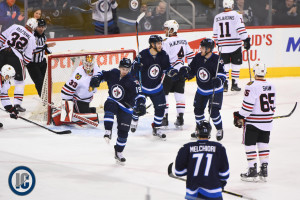 Winnipeg Free Press:  Ben Chiarot feels he can make a bigger contribution to Jets lineup.  (Paywall).  The man with the hardest shot still feels that there is more that he can demonstrate with his play.

Winnipeg Free Press:  Newest Jet expected to play in Anaheim.  (Paywall).  Remember that Andrew Copp was signed on March 26th, 2015 by the Jets but didn’t play his first game until April 11th (final regular season game for Winnipeg).  So it isn’t all that surprising that coach Maurice wants to get him acclimatized to the team.

Winnipeg Sun:  Home, awful home.  Home or away it hasn’t been a good season for Winnipeg.

Illegal Curve:  Is there any value in Bryan Little returning before the end of the season?  With the Jets centre inching closer and closer to 100% health we look back to when the injury occurred, the passage of time and ask the above question.

Illegal Curve:  Jansen Harkins signs an amateur tryout agreement.  The Jets 2015 2nd round selection will be practicing with the Moose today.

Global news:  Manitoba makes some moves.  In addition to Jansen Harkins signing the Moose dropped a few players on Saturday.

Topics: Jets-Blackhawks Recap. Minnesota Wild: Playoff Contender or Pretender? “All of the Winnipeg Jets Assistant Coaches will be back next season”. Eastern and Western Conference Playoff Races Update.