Note:  The Jets ended their two game road trip with an overtime loss in Philadelphia.  The Jets have the day off today before they hit the ice tomorrow for the final home stand of the 2015-16 season.

Note II:  The Moose won the re-match with the Charlotte Checkers last night on the strength of two Scott Kosmachuk’s goals and Connor Hellebuyck made 26 of 27 saves.  The team will travel today to Des Moines, Iowa for a two game set against the Iowa Wild.

Note III:  Tune into NHL This Week as the guys give you two hours of NHL and Winnipeg Jets hockey talk on TSN 1290 Winnipeg starting at 6 pm.

TSN:  Jets hoping new recovery method pays dividends.  When you have to criss cross the continent the way these guys do any competitive advantage you can achieve is a good thing.

USA Today:  The 10 biggest surprises in NHL this season.  Jets get mentioned in number 8 as Dustin Byfuglien helps to dispel a myth about the city.

Sportnet:  30 Thoughts.  #10 relates to Kyle Connor.  The autoplay videos are a “wonderful” addition to reading this article (said nobody, and me specifically, ever).  And if it isn’t obvious and to quote Homer J Simpson “In case you can’t tell I’m being sarcastic”.  I’m like Jake Jarmel (Seinfeld) adding exclamation points on reinforce my disdain.

Winnipeg Free Press:  Five Takes on Jets vs. Flyers.  (Paywall).  Includes: 1) Point opposite of what tank nation wants. 2) Pavelec auditioning for next year. 3) Flyers under the microscope. 4) Jimmy Vesey story giving other GMs pause and 5) #ConnorWatch.

CBC:  What will the Jets’ lines look like next year?  Quite a few different possibilities exist for the Jets next season and we can probably expect it to be discussed all summer long. 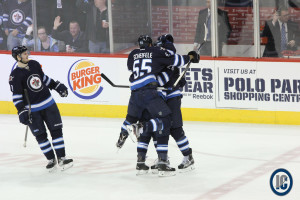 Philadelphia Inquirer:  Flyers beat Jets on Giroux’s goal in OT.  Read about the game from the perspective of a beat writer’s who covers the team in the city of Brotherly Love.

Winnipeg Sun:  Big Buff an elite D-man.  Quite clear that the Jets bench boss loves the evolution of big #33.

Illegal Curve:  With the season ending for Michigan #ConnorWatch officially begins.  All eyes are on Michigan as fans wait to see what path the 2015 1st round pick chooses to do.

Winnipeg Free Press:  Kyle Connor is probably NHL-ready, but…. (Paywall).  Ed offers this as folks around this town turn their focus to the next wave of prospects.