Note:  The Jets will try and erase the memory from last night’s 4-0 loss with a practice today at the MTS Centre as they get ready for tomorrow’s afternoon contest against the Ducks.

Note II:  The Moose will face the Lake Erie Monsters in a rematch and for the final time this season tonight at Quicken Loans Arena at 6 p.m.

Note III:  Tune in for three hours of NHL and Winnipeg Jets talk on the Illegal Curve Hockey Show on TSN 1290 Winnipeg today from 9 am until noon.

Winnipeg Free Press:  MTS Centre shows love for Ladd.  In addition to the standing O fans gave him during his 1st period tribute fans cheered when he scored the third Chicago goal (his 20th goal of the season) and when he was announced as a star of the game. 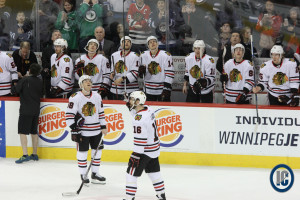 Winnipeg Sun:  Ladd appreciates salute in 4-0 Hawks win.  There was a lot of genuine emotion from both the Jets former captain as well as the thousands of fans who paid tribute to his contribution to the city and this franchise for the past five seasons.

Winnipeg Sun:  Fans taking wait-and-see approach to whether they’ll be able to see action.  The work has begun on rectifying the obstructed views.

Winnipeg Sun:  Petan looks to stick with Jets this time around.  Coach Maurice surely thrust him right into it last night including give the young prospect time on the Winnipeg power play.

CBC:  A few words on some guy named Andrew Ladd.  Reflections on what Ladd meant to this team. 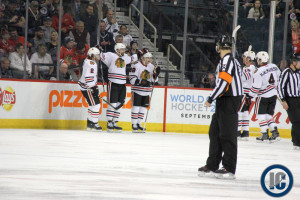 Illegal Curve:  Jets pay tribute to Andrew Ladd. (video).  During the 1st period of the Jets and Hawks game there was a video tribute to the former captain.  Fans, not surprisingly, gave Andrew Ladd a standing O throughout the video.

Pressbox Podcast:  Host and analyst Richard Pollock breaks down the Jets play against the Hawks.  To listen click here.

Winnipeg Free Press:  Hellebuyck makes 36 saves, Moose snap losing streak with win over Monsters.  It was his third shutout of the season and ninth of his AHL career as he finished the contest with a 36 save performance.