Note:  The Jets are back home for the first of four games to be played at the MTS Centre in downtown Winnipeg beginning tonight against former captain Andrew Ladd and his Chicago Blackhawks.  Be sure to keep it locked here for the latest Jets news. As soon as illegalcurve.com is updated we will also notify you via Twitter | Facebook | Instagram.

Note II:  The Moose are in Cleveland to take on the Monsters tonight for the first game of a back to back in Ohio.

Winnipeg Free Press:  For love of the game (and money, pride, fame…). (Paywall).  Lots still on the line for many players as they audition for next year. 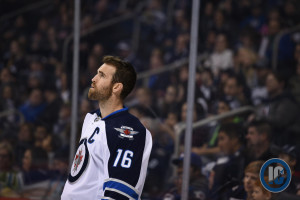 Winnipeg Sun:  Did the Jets let Andrew Ladd down?  Paul writes about the promise made to the former Jets captain and how it was ironically kept but not in the expected manner.

Winnipeg Sun:  Burmistrov auditioning for a more offensive role with Winnipeg Jets.  Pretty clear that he is playing a lot more comfortably of late.  Ken also touches on Ladd’s return, Melchiori’s return to the AHL and Petan’s recall.

Chicago Daily Herald:  Ladd’s return to Winnipeg an emotional one.  From being in the visitors room to being on the opposition bench it will be a strange evening for the former captain.

Metro News:  Who will replace Andrew Ladd?  Hustler looks at three guys who could possibly add a C to their jersey next season.

Illegal Curve:  If the NHL expands who would the Winnipeg Jets protect?  Plenty of talk about expansion so we took a look at who the Jets may be looking to keep on their protected list.

TSN 1290 Winnipeg:  Hustler and Lawless.  The guys discuss whether Mathieu Perreault is a part of the future for the Winnipeg Jets.

TSN 1290 Winnipeg:  Rona Roundtable.  Rick Ralph looks back on the Jets loss to the Flames and discusses why he doesn’t expect the Jets to buy out Ondrej Pavelec.

Illegal Curve:  Jets recall Nic Petan and return Julian Melchiori to Moose.  Thought is that JC Lipon wasn’t feeling too great after the game against the Flames so the Jets made the call to their AHL squad.  With Byfuglien being healthy the Jets sent Melchiori back to the Moose.

Detroit Free Press:  Michigan’s Kyle Connor (Shelby Twp.) a better freshman than Dylan Larkin?  A local (Michigan) perspective on the Jets 2015 1st round selection.  Connor and his Wolverine teammates will be going for a victory in the Big Ten hockey tournament semifinal today at 4 pm in St. Paul against Penn State.