Note:  Another late game as the Jets end this mini two game road trip tonight in Calgary.  Be sure to keep it locked here for the latest Jets news. As soon as illegalcurve.com is updated we will also notify you via Twitter | Facebook | Instagram.

Note II:  The Moose have a third day of practice before the head south to Ohio to take on the Lake Erie Monsters on Friday and Saturday night.

Winnipeg Free Press:  Youthful Jets could be even younger next season if management decides to overhaul its bottom six.  (Paywall).  Ed goes through the laundry list of prospects who we might see in the lineup next season.

Winnipeg Sun:  Enstrom elevates game.  Despite his diminutive size many rave about the way he sees the ice and can control the game.  However it also seems like fans who dislike the Swedish defenceman really think he negatively impacts the team.  Don’t count the Jets bench boss on that list as he raved about his top pairing D man. 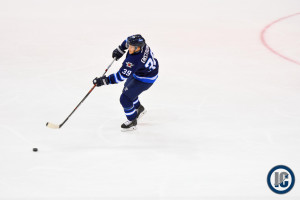 Winnipeg Sun:  Angelina Langlois, mother to Dancing Gabe, remembered for strength, patience and big heart.  Her son has become one of the most recognizable figures in the city and I’m sure that brought his mother a lot of joy.  Wish the family all the best.

Calgary Herald:  Gameday.  Get set up with news about both squads in this article.

TSN 1290 Winnipeg:  Hustler and Lawless.  The guys discuss whether Anthony Peluso and Matt Halischuk are a part of the future for the Winnipeg Jets.

Illegal Curve:  Coach Maurice scrum.  Status of Byfuglien.  What did the defence do well last night?  Getting Burmistrov’s game to where he wants it to be?  What did he see from Paul Postma yesterday?  The season Tobias Enstrom has had for the Jets.  How does he quantify the value in Enstrom (despite the offence decreasing but improved defence).  On the Flames.  On having a goalie rotation.  Is it more difficult to evaluate the group at this point in the season?

Globalnews.ca:  Eric Comrie on how he stays busy on the bus.  (video).  One-on-one with Moose goalie Eric Comrie to talk activities and growing up with brothers in the NHL.