Note:  The Jets play the final home contest of this five game set tonight against the Nashville Predators.  Be sure to check us out throughout the day for latest Jets game day news. As soon as illegalcurve.com is updated we notify you via Twitter | Facebook | Instagram.

Note II:  The Moose lost last night to the visiting Iowa Wild.  The team has the day off today so we will have to wait until tomorrow to get an update on the severity of the injury to Josh Morrissey who got tangled up behind the Moose net in the 2nd period yesterday.  While he finished off that period and came out for the 3rd he was removed by coach McCambridge for precautionary reasons.

Winnipeg Free Press:  Dude looks like a payday.  (Paywall).  He is going to be making some serious coin with the way he has played.

NHL.com:  Morrissey’s wild ride leads to NHL debut.  No question which of the Jets top picks has probably been the focus of more conversation that Josh Morrissey.  Patrick brings you up to speed with the wild ride of his season in the AHL this season.

Winnipeg Sun:  Salute to Jets history long overdue.  Paul focuses on the outdoor game as well as the coming out party for Mark Scheifele who has really emerged since the injury to Bryan Little. 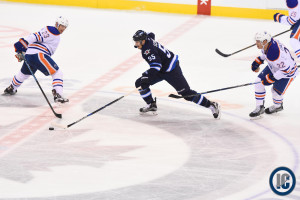 CBC:  Heritage Classic between Jets, Oilers could offer best of old and new.  No question the Oilers were the right choice of opponent.

Sportsnet:  Fan-created NHL draft lottery simulator is simple, brilliant.   Something I’m sure Jets fans are familiar with as they prepare themselves for the Auston Matthews sweepstakes.

Globalnews: Fan favourite Kroppy recovering in hospital.  Was starting to wonder where he was.  Hope he makes a full recovery and we see him once again at the MTS Centre.

TSN 1290 Winnipeg:  Hustler and Lawless.  The guys discuss whether Mark Scheifele is a part of the future for the Winnipeg Jets.

Globalnews.ca:  “It was like a scrappy game” Moose discuss 2-1 loss to Wild to open homestand.  Russ breaks down the game.

Topics: Young guys right on track? Giving young guys chances.  How to assess the young talent.  Lipon and Morrissey getting a chance with the big club.  Working with the recall limit and not wanting to run out.