All the latest Jets news.

Note:  The Jets hit the ice for a practice at noon as they get ready for a pair of back to back games.   Saturday night they take on the Habs and Sunday they will face the return of Pardy Dangle and some kid named McDavid as the Oilers roll into the city.

Note II:  The Moose are in the state of Texas where they too will play a double header starting tonight in San Antonio against the Rampage.  They then head down the road to take on the Texas Stars in Cedar Park.

Winnipeg Free Press:  Isles catch Jets, win 4-3 in overtime.  (Paywall).  It finally looked like the Jets were going to overcome their 3rd period difficulties but those pesky Islanders wouldn’t give up.

Winnipeg Free Press:  Clock is ticking on Jets GM.  (Paywall).  Lots of pressure on Kevin Cheveldayoff to produce a winner and soon.

Winnipeg Free Press:  Improving Buff made strong case for U.S. team.  (Paywall).  The brass were sure raving about big #33.

Winnipeg Free Press:  Armia not looking back as confidence grows.  The additional ice time seems to have really benefited the young Finn.

Winnipeg Sun:  Scheifele shines as Jets lose to Isles in OT.  With his two goals last night he has now reached a career high in goals (17) in just 52 games played.  Consider that last season he had 15 goals in 81 games and the Jets current #1 centre is really starting to hit his stride.

Winnipeg Sun:  Byfuglien’s inclusion on initial World Cup roster shows how far he has come as a player.  It has taken awhile for his country to recognize what he can bring to a Team USA roster but they gave him the honour (or should it be honor since we are talking US team) of an early selection.

Winnipeg Sun:  Travis Hamonic keeps his focus on Cup pursuit despite trade request.  He was the best Islanders player on the ice and it had to be a bit weird playing in a building as the opposition knowing you could be wearing that uniform next season.

Sportsnet:  Ehlers takes puck to face as team loses in OT.  (Video).  It looked really bad seeing the young Jets rookie holding his face after the puck hit him in OT. 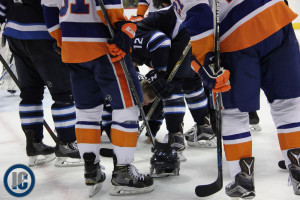 CBC:  Jets’ young roster is a convenient excuse.  Doesn’t mince any words about the results that fans have seen this season.

Newsday:  Islanders tie Jets with 28.3 seconds left, win in overtime.  Read about the game from an Islanders beat writer’s perspective.

Metro News:  We always have the draft lottery, Winnipeg Jets fans.  Fans are already trying to figure out which spot they will be getting in the top 5.

Pressbox Podcast:  Host and Analyst Richard Pollock breaks down the Jets play against the Islanders.  To listen click here.