Note:  From an emotional game against the Dallas Stars here in Winnipeg on Tuesday night the Jets will face off against the Dallas Stars once again this evening in a rare home and home series against their central division rival.  Be sure to check us out throughout the day for latest Jets game day news. As soon as illegalcurve.com is updated we notify you via Twitter | Facebook | Instagram.

Note II:  After winning four straight games (including three on the road) the Moose return to Winnipeg losers of two straight.  They will play a pair of road games against Charlotte at the MTS Centre on Saturday and Sunday.

ESPN:  Buyers and sellers in the Central Division.  Bet you cannot guess which side of the ledger the Jets fall into?

Winnipeg Sun:  Long list of suitors for Ladd.  Ken goes through the list of teams that might be in the market for a left winger with Stanley Cup experience.

Winnipeg Free Press:  Jets missing five from practice, including Ladd. (Paywall).  How odd would it be for a Jets/Panthers trade to happen and then the Jets would face their former captain the day after the trade deadline.  Wouldn’t that make for some unusual theatre at the MTS Centre on Tuesday night.

Winnipeg Free Press:  Here’s something to get excited about.  (Paywall).  Suggesting the NHL draft lottery and trade deadline are the best storylines Jets fans can hope for.  As is evidenced by our poll most readers feel that the Jets are going to be making a top pick in Buffalo.  And if so you may want to get familiar with this old/new name to Jets fans. 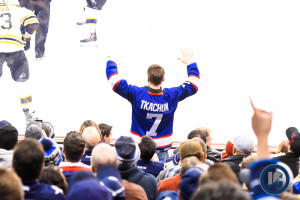 Winnipeg Sun:  Deja blue for Myers and Stafford.  After getting an old too brief taste of the good life last season it is back to the same old same old for these two former Sabres.

TSN:  Leafs Lunch. (Video).  Darren Dreger joined Leafs Lunch and gave the latest on what’s going on with the Winnipeg Jets, and if they will be looking at trading more than just Andrew Ladd.

ESPN:  Best fits for four top NHL trade deadline targets.  Has Jets captain heading out East but not to the team that will be here next Tuesday.

Illegal Curve:  Bryan Little being given further tests; could join team on road trip in Pittsburgh.  When you lose your top line centre for any period of time it is never good for business.

Illegal Curve:  Jets Practice Report.  See the players who were on the ice yesterday for skate at the MTS Centre.  Hear from Drew Stafford and Tyler Myers.

TSN 1290 Winnipeg:  Hustler and Lawless.  Darren Dreger joins the show to discuss the unresolved situation between the Winnipeg Jets and Andrew Ladd. Dreger says the trade market for a player like Ladd still hasn’t been set, and might not be set until Monday morning.

TSN 1290 Winnipeg:  Hustler and Lawless.  The guys clear up the characterizations that either side ended the Andrew Ladd – Winnipeg Jets contract negotiations, and posit whether more Jets players should be traded.

Illegal Curve:  Coach Maurice scrum.  On the players missing from the skate today.  Might Little join for Pittsburgh. Trying to beat the Stars for the first time in five tries.  Does he talk about the playoffs with the players?  How hard is it to keep players motivated as the playoffs slip away?

TSN 1290 Winnipeg:  The Big Show.  Matt Larkin of the Hockey News dropped by for some hockey talk including teams looking to make moves at the deadline, the frontrunner in the Andrew Ladd sweepstakes and why the Jets should keep their captain out of action for the final two games before Monday’s deadline.

Michigan Wolverines official site: Connor’s path to greatness includes the company he keeps.  Jets fans continue to get more and more excited about their top pick in 2015.

Yahoo Sports:  Kyle Connor’s case for Hobey Baker.  Hard to argue with the season he has had to date.

Bryan Little being given further tests; could join team on road trip in Pittsburgh
Game 60: Jets vs. Stars projected lines