Note:  The Jets won both road games as they began a segment of the schedule that will have them out of town for most of the month.  The team is off today and will hit the ice tomorrow at the MTS Centre as they face off against the Bruins.  They then head out for four games on the road (@ Edmonton, Carolina, Tampa and Florida).

Note II:  The Moose lost a tough one last night at home and will have a chance for revenge tonight in a re-match against the Texas Stars.

Winnipeg Sun:  How The Trade has worked out for all parties one year after Jets-Sabres blockbuster.  Where does the time go?  Ken takes you back in time as we reach the one year mark of the biggest trade in Jets 2.0 history. 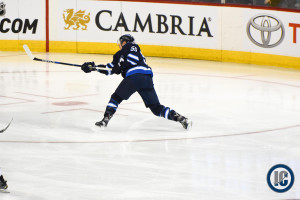 Winnipeg Free Press:  Ladd demurs on contract uncertainty as Jets prepare to face Blues.  (Paywall).  Ed offers up this piece on the situation with the Jets captain.

Winnipeg Sun:  Jets shoot down Blues.  Ken was in St. Louis and provides his thoughts on the Winnipeg win.

Winnipeg Sun:  Ladd unsure of what Byfuglien deal means for him.  Just when you resolve one situation another rears its head.

CBC:  Byfuglien’s big deal could mean big changes to the Jets blue-line.  With the Byfuglien deal in the background it is now time to turn the focus onto the rest of the question marks that surround this squad.

Sportsnet:  Latest on Schultz, Ladd, Yandle, Reimer.  Just a roundup of the latest rumours surrounding some players reportedly on the market including the Jets captain.

Illegal Curve:  With Ondrej Pavelec “fairly close” what will Jets do about their goalie situation?  Sounds like this problem is going to require a resolution sooner rather than later.

Jets 2 Blues 1 in SO post-game audio:

TSN 1290 Winnipeg:  Hustler and Lawless.  Ed Tait of the Winnipeg Free Press discusses the importance of signing defenseman Dustin Byfuglien and what may be next for captain Andrew Ladd.

TSN 1290 Winnipeg:  Rona Roundtable.  Tim Campbell of the Winnipeg Free Press talks with Rick Ralph about Dustin Byfuglien’s five year contract with the Winnipeg Jets and what that signing means for the team going forward.