Note:  The Jets head back to the MTS Centre for practice today as they prepare for a Friday night game against the Carolina Hurricanes.  It will be the final home game before the team heads out for eight of ten games on the road to close out February.

Note II:  The Moose have one more day for their AHL All-Star break before they return to the MTS Centre for a Thursday night game against the Toronto Marlies.  They play their next six games here in the city between February 4th and the 14th.

The Hockey News:  Trade dominoes will fall once Jets decide what to do with Byfuglien, Ladd.  And so the hockey world collectively waits!

USA Today:  Dustin Byfuglien leads list of top 11 players who could be dealt before NHL trade deadline.  Not a surprise that he and Andrew Ladd are both on this list.

Illegal Curve:  Dustin Byfuglien speaks about prospect of re-signing with Winnipeg.  Perhaps the national pundits who made a mountain out of a mole hill from his All-Star game comments should listen to what he had to say last night. 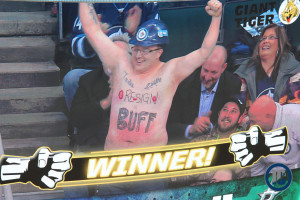 Winnipeg Free Press:  Winnipeg flashes brilliance but get snuffed out by explosive Stars. (Paywall).  Plenty to digest in this recap from Ed.

Winnipeg Sun:  Close not good enough for Jets.  Plenty of chances in this contest but close but no cigar doesn’t give you any points in the standings bank.  Ken also writes about 1) Ladd absence fuels rumours. 2) Three Stars and 3) The Skinny. 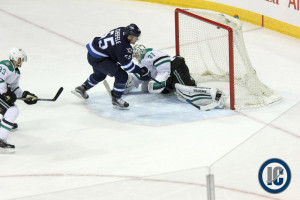 CBC:  Jets plan to reset season requires wider lens.  Adam looks at the tall task ahead of this team and which button (reset, reboot) or is it time to turn off the lights?

Dallas Morning News:  Wild win against Winnipeg looked a lot like Stars’ first three months.  Read about the game from the perspective of a Stars beat writer.

Sportsnet:  30 Thoughts.  Point #16 deals with the Byfuglien comments from the All-Star weekend (but prior to the statement that 33 made following last night’s game).

ESPN:  Could Dustin Byfuglien find a perfect fit in Los Angeles?  Pierre LeBrun thinks big #33 could be just the thing to put the Kings over the top in the West.

Jets on a Deadline:  Game recaps, post-game audio and the NHL.com 3 Stars of the night.  Click here.